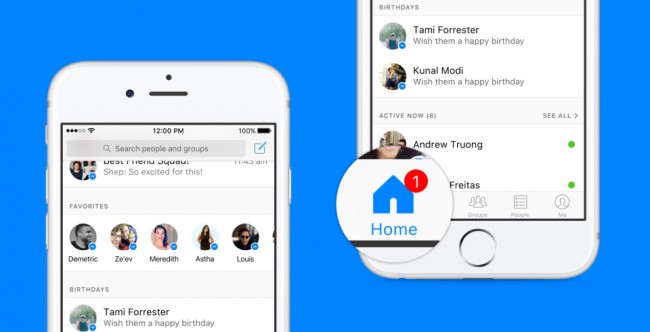 Facebook Messenger is about to get a redesign, and it sounds like it’ll be a combination of your email inbox and your old AOL instant messenger toolbar. The redesign, which hasn’t been rolled out for everyone yet, will include a “Home” button that will take you to a redesigned screen.

At the moment, my version of Messenger does indeed have a “Home” button, but it just takes me to a page that shows me all my most recent messages. In the new version, that “Home” button will bring me to a page that divides into three sections. Up at the top, the most recent messages will still appear, but it’ll only be the four most recent ones. After that, you’ll scroll down and see a “Favorites” section, which will include your most frequently messaged contacts; this part reminds me of the customized “Favorite” list at the top of my old AIM Buddy List. Then, as you scroll further, you’ll see a list of all the contacts who are currently online. As for whether Facebook will include an opening-door sound effect every time someone logs in, well, you might have to mod in that aspect yourself.

In the blog post about the redesign, Facebook has a short video clip that walks you through what the new “Home” page in Messenger will look like, and it does include a whole lot of goofy sound effects. I don’t think those sounds are really going to be in there. I hope they aren’t.

Anyway, the announcement emphasizes that Messenger will be “simpler” now, but let’s be real: it doesn’t look “simpler” at all. It’s a lot more complicated, because now it’ll be emphasizing all of the other people that you could be talking to, as opposed to just showing you the messages that you received. Basically, Messenger will start looking more like AIM and less like an email inbox.

The other new addition? More reminders about people’s birthdays. I guess that’s the main thing Facebook can do well: remind everybody whether or not it’s someone’s birthday, and then give you an immediate way to contact them and wish them a happy birthday. At least Facebook knows their strengths!