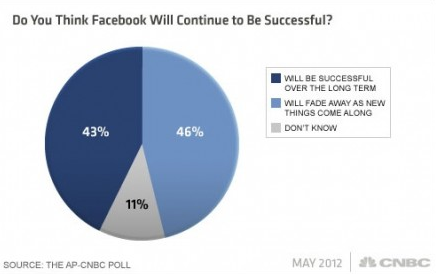 The big news on the net today is that, according to a CNBC poll, a whopping 46% of Americans think Facebook is little more than a passing fad. In addition, the poll revealed that 51% of Americans think Facebook stock would be a good investment (31% don’t), and 50% think the service is overvalued. Despite what those polled might believe, America is home to roughly 200 million Facebook accounts, or nearly two thirds of the population. Enlightening? Well, insofar that it reveals what Americans tend to think, sure. But about the facts of the matter? Probably not so much. It might be wise to consider a few of the other things polls have revealed about American beliefs. Let’s have a look, shall we?

Granted, some of these things are up for grabs; who knows what the economy will be like next May. Others are incontrovertible facts. Scientists are completely sure global warming is a thing, though the finer points of the issue are still debated. All said and done, it’s interesting to see what Americans think, but all you’ll find out is what Americans think.

The Facebook poll consisted of the opinions of 1,004 Americans surveyed over the telephone from May 3–7, 2012. The margin of error is ±3.9 percent. It is, however, a poll, so it’s important to consider that there are certain inherent biases involved. The rules about calling mobile phones for polls, for instance, are a little complicated in the United States, and things like that could definitely have some effect on responses.

Really though, the main point is: So what? Americans can think whatever they want, but so long as they continue to use the service, which the numbers suggest they are doing, it’s certainly not going to be a fad that passes. As it rolls toward its IPO, Facebook definitely thinks its going to stick around, doing things like announcing its Apple-esque App Center to try and sprawl out into yet another part of the Internet landscape. 46% of Americans might not think so, but 100% of Geekosystem editors who wrote this post think that Facebook isn’t going to go away no matter what you think. Sit back and place your bets.