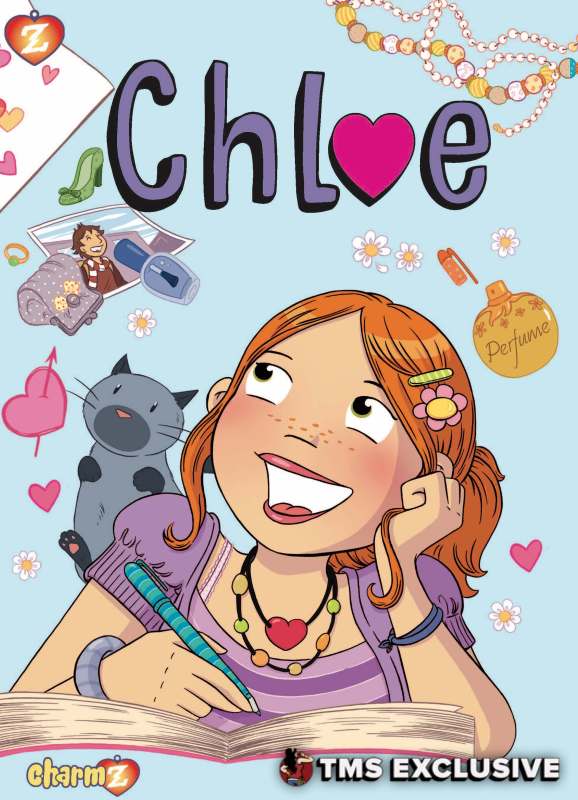 Today is the final book reveal from the new imprint from kids’ graphic novel publisher, Papercutz! Charmz is a new line of graphic novels aimed at tween girls that’s set to launch in May 2017. In a lead up to SDCC weekend, we’ve revealed a new book every day this week. Check out the deets about the last book below, as well as exclusive preview pages!

So far, we knew that the Charmz line was launching with Stitched, The Great Cosmic Race, and Sweeties. Now, we have Chloe, which is written by Greg Tessier, with art by Amandine. Like Sweeties, Chloe was also originally published in French before being brought to the States for the Charmz line. Here is the official info from Papercutz:

Everything was wonderful for young Chloe Blin— she loved her family, even despite their affectionate nickname for her. But everything changes when she starts at a new school. Suddenly, her family is just embarrassing! Chloe wants to meet new people and make new friends, especially with a certain Alexandre, but she’s not sure what to say or wear or who to trust. The home room fashionistas are only too happy to tell her how her clothes look, but can they really be her friends? And what if everyone heard her family’s name for her?

I’ve gotta say, I’m wondering…what the heck could her family call her that it’s this traumatic?? And also, I wonder if whatever it is translates well into English. It seems like an awful lot of story to hang on one language-based plot point. Then again, I already feel Chloe’s pain. My older brother and sister used to call me “Wad” when I was a kid. Ie: I was a little wad of fat. So I totally get how an embarrassing family nickname can color how you view the world, and yourself. Sheesh.

Now that we’re all commiserating over how crappy our childhoods were, Check out these unlettered preview pages that will give you a feel for the world of Chloe in the gallery below:

Greg Tessier has been writing stories since childhood. His first comic series, Mistinguette, on which he also works with Amandine, has been very well received in France and is now being translated in English for the first time. Meanwhile, Amandine first came to the comics scene in 2006 with her work on Violet’s Wings, based on a screenplay by Sarabelle. She attended the University of Paris VIII, where she studied comic arts. When she is not working on the Mistinguette series, she continues to seek out new projects and visit French schools.

Sounds like a fun title with a creative team that has a long, successful history. I’m looking forward to checking out Chloe, and indeed all the titles coming out of the Charmz imprint. As a geeky, comics-reading aunt with nieces that are at the right age for these books, I’m looking forward to having something to share with them that will get them hooked on comics!

The Charmz line debuts in May 2017. Meanwhile, you can visit the Papercutz booth at San Diego Comic-Con if you’re there this weekend (#1720), and if you’ve got some young’uns in your life, Papercutz will be rolling out some awesome creator signings on Sunday, which is Kids’ Day at SDCC.