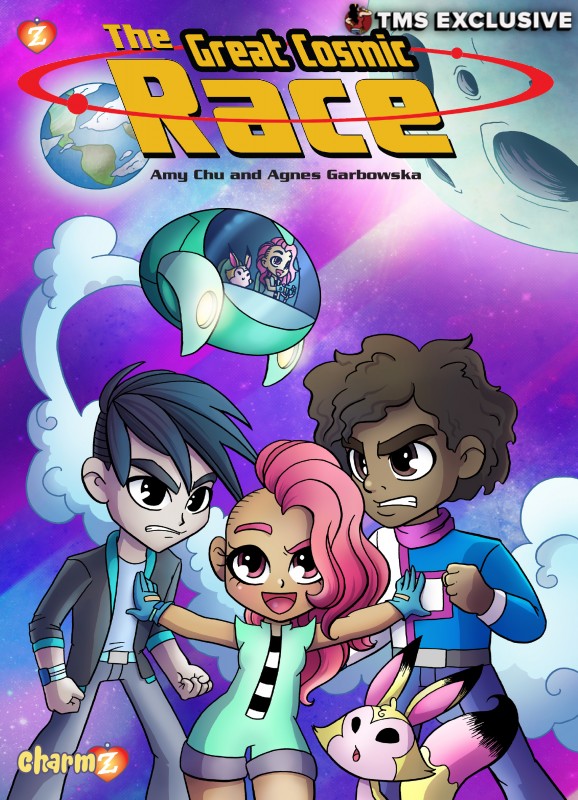 It is now day three in our week-long exclusive reveal of the first four books in the new Charmz line from Papercutz. As you read in our exclusive announcement, Charmz is a new line of graphic novels aimed at tween girls that’s set to launch in May 2017. In a lead up to San Diego Comic-Con, we’re revealing a new book every day. Check out the deets about the next book below, as well as an interview with the creators!

Yesterday, you read about the awesomeness that is Stitched. Today, we go from the cemetery to outer space with The Great Cosmic Race, written by Amy Chu with art by Agnes Garbowska. Here’s the official solicit information from Papercutz:

Mysterious media mogul megaquadrillionaire Dr. Laslo issues a challenge to the best and brightest students in the Scholastic Federation to a cosmic scavenger hunt. The grand prize – his vast empire. But the clues are hidden across time and space, and only the best and brightest will be able to find them and win.

Super studious Ana, a scholarship student at Dalton Phillips Prep, is determined to win, for herself and her struggling family back at home. She teams up with the 2nd best student at the academy, the eccentric exchange student Zyxyx. an alien shapeshifter. But the stakes heats up when the competitors from Dalton’s rival schools enter the race – handsome Keio from snobby Tokyo Prep and the enigmatic Ekene from the elite South African Academy. Their behavior confuses her- are they competing against her or trying to help? And why? Suddenly the competition becomes a lot more complicated….

The Great Cosmic Race is being called “Willy Wonka meets Carmen Sandiego” and purports to bridge the gap between Magic Treehouse and Doctor Who. What excites me, though, isn’t its similarity other things, but the ways in which it’s different. As far as we’ve come, particularly with female protagonists in YA novels and comics, we still don’t have nearly enough female protagonists specifically in science fiction. The Great Cosmic Race does!

I also like the sound of the diversity implied in the name of the prep schools, as they promise a Japanese and a South African character in addition to the female lead. It’s unclear where Dalton Phillips Prep is located, but the heroine seems non-white on the cover. And sure, a love triangle is implied. Here’s the thing: this is for a tween audience, and tweens are fascinated by love interests. The tweens that aren’t will likely still be pulled in and entertained by the sci-fi elements. There’s something for all girls to get out of this!

Once again, Charmz provided us with an exclusive look at some interior artwork! Say hello to the cast of The Great Cosmic Race in these character sketches:

As with Stitched, The Great Cosmic Race has a fantastic creative team behind it, led by Amy Chu and Agnes Garbowska. Chu is graduate of MIT and Harvard Business School, and she has made a name for herself through her work with DC Comics. She has written for both the Poison Ivy and Wonder Woman characters, and she now runs the imprint Alpha Girl Comics. Garbowska is a Polish artist who has worked for various comics publishers, including IDW and Marvel, in addition to pursuing personal projects. You can find her artistry on the bestselling My Little Pony comics and on the covers of Cartoon Network classics like Powerpuff Girls and Dexter’s Laboratory.

Teresa Jusino (TMS): What excites you about telling stories for a younger audience?

Amy Chu: Kids are smart–in some ways smarter than adults. I have a 12 year old and an 8 year old, and they are very astute media consumers. They know what they like, and that makes it a real challenge.

Agnes Garbowska: The possibilities! There is so much you can work with. I just keep thinking back to what I enjoyed reading at that age and I want to be able to tell those kind of stories. I want to create stories that excite the younger audience and make them feel like they can envision themselves in that world.

TMS: What’s special to you about working for Papercutz and the Charmz line?

Chu: When I was just getting started in comics, Editor in Chief Jim Salicrup went out of his way to be supportive, and this was way before Poison Ivy and my other DC work. So I’m really thrilled to be part of this inaugural Charmz lineup.

Garbowska: Since my web comics, I have wanted to go back to creating action/romance stories, and now we get a chance to do just that! I used to read a lot of Manga when I was a pre-teen, and I was always excited reading the romance stories that had a twist. I wanted to be that girl in the story, and now I get a chance to create stories that I hope give girls (and boys) those same feelings I had at that age. I think pre-teens and kids of all ages are going to enjoy all the romance stories from the Charmz line, since they are all so different from each other! 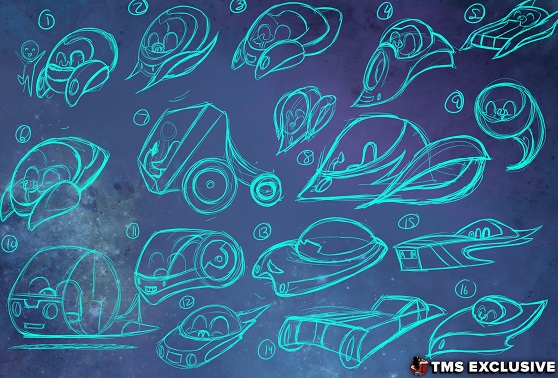 TMS: How did you develop the idea for The Great Cosmic Race?

Chu: Oh, god, I had to look back at the email thread, but I originally pitched it as something midway between Magic Treehouse and Dr. Who… but I was also thinking of the wackiness from Wacky Races with Penelope Pitstop. Oh, and definitely the intrepidness of Where in the World is Carmen Sandiego?

Garbowska: Amy and I had a chance to develop a short story (never used for anything) that had time travel, and we wanted to focus on the syfy aspect, but this time incorporate it into this new line of pre-teen romance comics that Papercutz wanted.

TMS: Beyond entertainment, what do you hope the girls (and boys, too!) who read this title take away from it?

Chu: Like Carmen Sandiego, I really, really hope it’s educational, without seeming like it all. Stealth learning is the best learning…

Garbowska: A feeling that anything is possible. I hope to create those goosebumps moments for them when the characters interact with each other and they really remember those moments. Relationships are hard and your first crush is hard too, so I feel that reading the story everyone will be able to relate to the characters and the situations, even if they are in a futuristic syfy world!

TMS: Describe your working relationship with Agnes. Who brings what to the storytelling table, and for what do you rely on each other?

Chu: I’m just the writer–what’s important to me is the spirit of the characters, the storyline and plot. Rachel has been an awesome editor in this regard. I leave all the adorable character design and world-building up to Agnes. I would say I definitely tend towards more of the Marvel method–it’s always much easier to change the words rather than the art. I prefer to focus on the dialogue after I see the artwork, and then everyone is much happier. 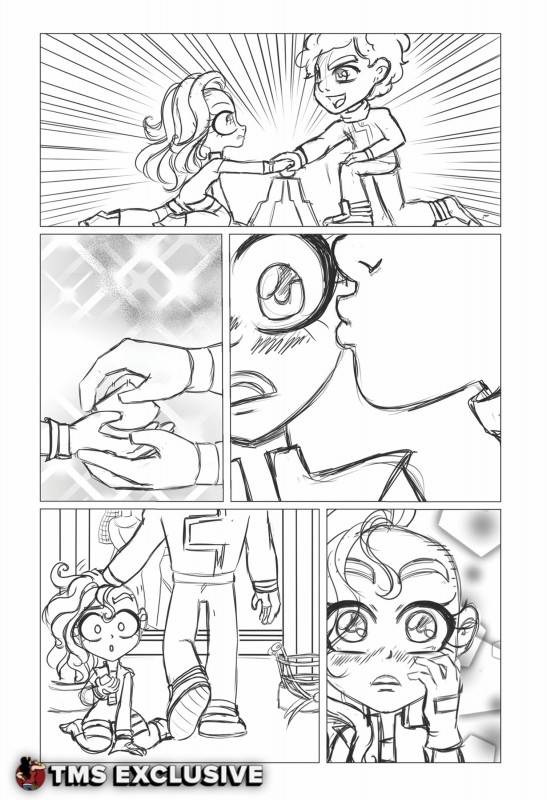 TMS: What about you, Agnes?

Garbowska: When Rachel approached me to be part of the line, I told her I really wanted a co-creator. I just finished working with Amy on our little short story that we did not do anything with, and I liked how we bounced ideas off each other. Each new project with a new creative team is exciting, and working with Amy is exciting so far! Rachel is also an amazing editor, and I have been dying for a chance to work with her as well! With both their suggestions I am having a blast designing and bringing the characters and the world to life.

TMS: Are there any other projects you’re working on that The Mary Sue’s readers should keep an eye out for?

Chu: I’ve got a really fun Wonder Woman ’77 story coming out, as well as the third DMC graphic novel for Darryl McDaniels of RUN DMC, and a sci-fi KISS miniseries for Dynamite.

Garbowska: My Little Pony for sure! I have been on the MLP books for about three years now and they are always a great read for any age. My Little Pony: Friendship is Magic 46/47 focuses on an election taking place in Ponyville and I’m working with Ted Anderson on those issues coming out in September and October. It has recently been announced that Boo: The World’s Cutest Dog now has his own comic and I am doing covers for the issues and even interiors for Issue 2 (And maybe beyond)! I am doing regular covers for Grumpy Cat as well, which have been coming out the last few months. Also stay tuned for an awesome announcement from myself and Franco from Aw Yeah Comics later this year!!!

For more information on the Charmz line, stay tuned all week, as I’ll be sharing interviews and exclusive art from all four books with which Charmz will be launching in the spring!