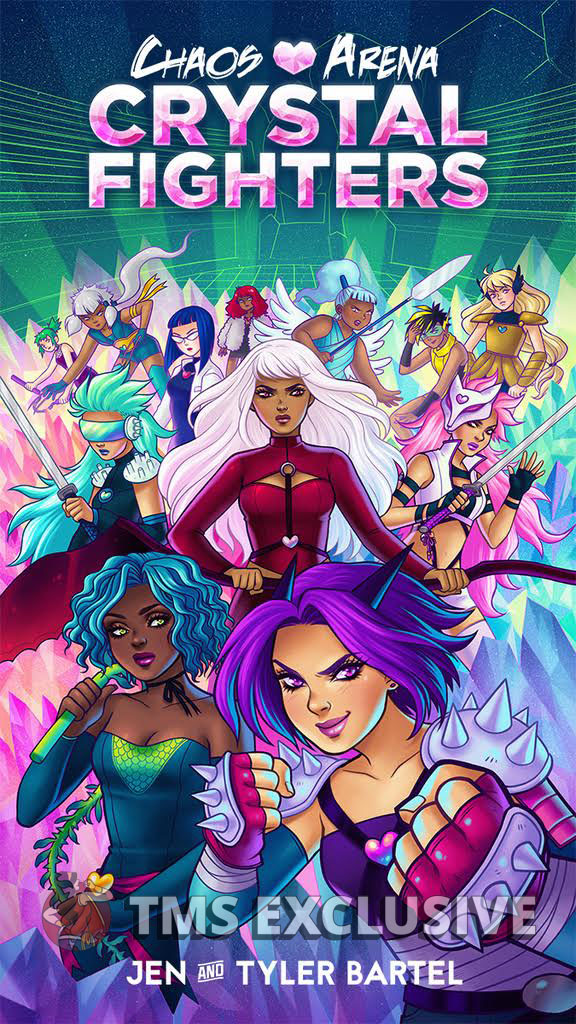 Love reading comics but don’t have the time to run down to your local? Stēla is a brand-new app that delivers awesome comics right to your mobile device – and one of the comics launching today is right up The Mary Sue’s alley. In Crystal Fighters: Chaos Arena, we meet the toughest gang of video game magical girls ever – and I got to speak with the comic’s creators, Tyler and Jen Bartel (who you might recognize from her amazing Sailor Moon fan art).

Sam Maggs (TMS): What can you tell us about Chaos Arena: Crystal Fighters? One character describes it as “Secret Magical Girl Fight Club,” which is just so great.

Jen Bartel: That’s basically what it is in a nutshell!

Tyler Bartel: The story revolves around a young girl named Stella Kim, who is part of the first generation to grow up with virtual reality games. Her parents are wary of the technology and only allow her to play bland, all-ages titles, one of which is Crystal Fighters—it’s a very bubbly and positive world where you assume the role of a magical girl. Through a series of events, she discovers that other players have created an underground battle arena within the game.

TMS: I love the diversity in this comic. Tell us a little bit about what went into creating Stella, who isn’t really on board with the magical girl genre at all at first, and Jessica, a more traditionally feminine character.

Jen: When we were creating Stella, the biggest goal for me was to make a character that I would have liked and identified with when I was a teenager, but I also wanted her to have real flaws. It was really important to me that Stella represented your average teenager who’s maybe kind of a brat, thinks she’s smarter and more capable than everyone around her, and really doesn’t like being told what to do. She’s not a rule-follower, but she’s also dealing with the pressure of feeling like she has to fit this mold of what a “girl” should be. Jessica, on the other hand, is kind of an airhead who doesn’t really question things and enjoys the game.

Tyler: I think for Stella, the problem isn’t that Crystal Fighters is a magical girl game, but that’s it’s a really watered down, no-edges version of the kind of thing she wishes she could play. She’s at that age where she’s starting to feel more grown up than her peers and especially more than her cousin Jessica. The fact that Jessica embraces the whole concept without questioning irritates her to no end. I mean, Stella just finds her very insufferable in general [laughter]. In our minds, Jessica is that relative that is kind of in the same age range, so Stella has been stuck with her at family events but they have nothing in common so she really hates having to spend time with her. 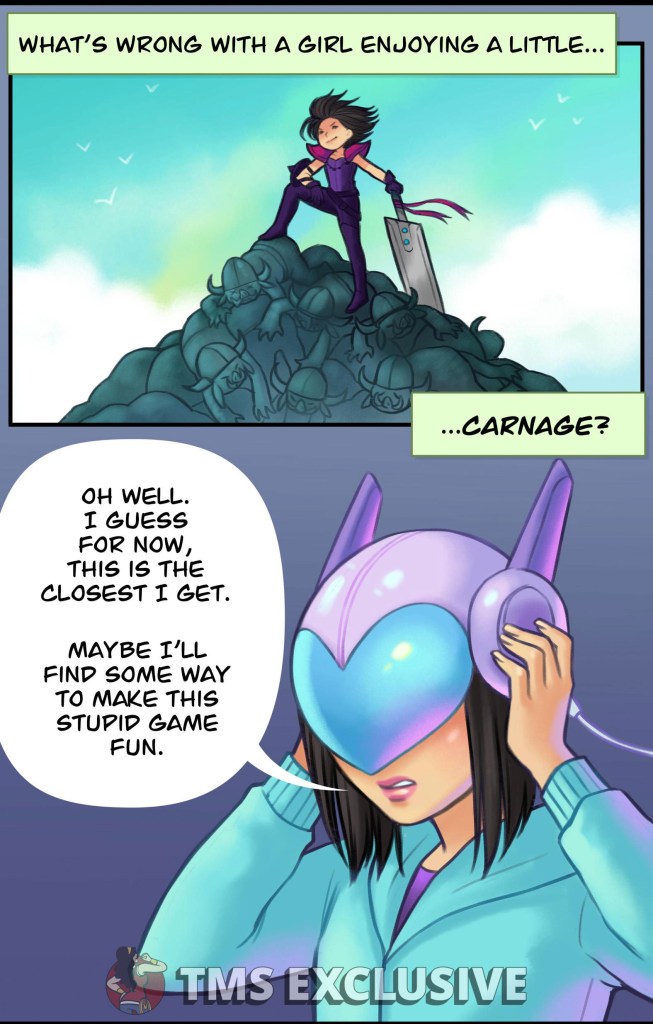 TMS: What can you tell us about the antagonist of Crystal Fighters?

Jen: We don’t want to reveal too much just yet, but the biggest difference between the main antagonist (Penelope) and Stella is that Stella is her true self regardless of where she is, whereas Penelope sort of leads a double life. You’d never be able to identify her in the real world based on who she is in the game, and I feel like that’s a really common occurrence when it comes to “internet personas.” Penelope has tons of confidence when reigning over her VR battle arena, but not so much in real life.

Tyler: Aside from Penelope, one of the best things about the series is getting to introduce new opponents for Stella to battle in each chapter, so there ends up being a variety of antagonists. Each one has a unique style and skillset that I think readers will enjoy.

TMS: I love the fusion of magical girls and video games in Crystal Fighters. What were some of your gaming touchstones when it came to creating this comic?

Jen: Most of our visual inspiration came from media we loved as kids (like Sailor Moon and TRON) but as I’m working on the comic I often think back to what it was like playing Pokémon with my friends when I was a kid—carefully picking your best six and battling it out to see who was the better trainer—I think Crystal Fighters definitely channels that theme of friendly competition between buddies.

Tyler: The mechanics of the arena are inspired by SNES/Playstation-era JRPGs and arena combat games like Powerstone. Also, the TV commercial for that ’90s board game Crossfire.

TMS: Why was creating a magical girl comic important to you? Who are your favorite fictional magical girls?

Jen: I grew up with Sailor Moon, Magic Knight Rayearth, Cardcaptor Sakura, etc.—I loved those properties so much and they really shaped a lot of aspects of my life, but the Magical Girl genre is sort of based around this idea of being a “pretty soldier” (bishoujo senshi!) and I really wanted to modernize that idea and frame it in a way that resonated with today’s audiences.

The whole point of these girls creating the battle arena is that it’s like a safe little nook in the game where they can wear their customized outfits that better express who they are and duke it out instead of conforming to how the game says they should look and act. We wanted to make a “magical girl” comic that was about girls taking the genre and doing what they want with it. My favorite magical girl has to be Sailor Mars though. Oh, and Molly, from Zodiac Starforce.

Tyler: One time I made Jen watch all 291 episodes of Dragon Ball Z with me, so in return she had me sit down and watch Sailor Moon. I was impressed with the art and I liked the characters, but was disappointed by how little punching happened [laughter]. So when we started talking about ideas for a comic, I was trying to come up with things that blended our childhood favorites into something anyone could enjoy regardless of gender. I don’t know if it fits neatly into the magical girl genre, but Project A-ko has some of my favorite fight scenes ever.

TMS: Why is Stēla a great way to bring Crystal Fighters to the world?

Jen: When I was first approached by Jim about pitching a comic for Stēla, I asked him if he was ok with a story that had a lot of female characters, and his response was that ultimately, the only thing that mattered to him was the quality of the storytelling. That really stuck with me, and I think Stēla is definitely holding true to their mission of empowering more diverse creators to make stories that represent all. It’s really awesome to not have to worry about whether we’re going to be questioned about a character’s skin color or body shape—we pretty much have full creative freedom to do whatever we want and it’s an environment that I can see a lot of people thriving in. I certainly don’t think we would have been able to pitch “underground magical girl fight club” to any other publisher and have them give us the green light.

From a visual perspective, doing this comic in a complete vertical scrolling style is really fun and allows for us to do some pretty epic long scrolling battle scenes, which we’re really excited for people to see. I’m also not sure Tyler and I would have been able to set up our workflow anywhere else—though his focus is definitely the writing while mine is the art, we both pass things back and forth every step of the way and it’s made the process really organic.

Tyler: As Jen mentioned, the format has been a lot of fun to work with. At first glance, the approach seemed like a no-brainer: “take traditional panels and stack them.” But when we actually started working, we quickly realized it’s more nuanced than that and there are a lot of subtle advantages. Because you’re limited to a few panels on screen at once, it allows you to pace the story more like a movie–you have very fine-grained control over what the viewer sees.

Beyond that, one of Stēla’s greatest strengths is its ability to marry ease of access and high-quality content. Going to a traditional comic shop can be a struggle if you’re too young to drive or you live in a smaller town, so I love that digital distribution has made content so available to everyone. But the Internet’s signal-to-noise ratio means that simply throwing your work online is rarely a viable way for creators to garner visibility, so I think what Stēla’s doing affords us the best of both worlds.

TMS: What would your power be, if you could be a magical girl?

Jen: Oh god, probably the power to make time move slower or just stop it altogether! There aren’t enough hours in a day to get all of my projects done and I’m constantly racing against deadlines. I guess if I was really smart I’d pick the power to draw faster, but… time stopping is so much cooler.

Tyler: I would love to be able to do more than one thing at a time [laughter]. I am the worst at multitasking, so that would feel like a magic power to me.

The first issue of Chaos Arena: Crystal Fighters is available now on Stēla, downloadable here through The App Store.