Kevin Panetta and Paulina Ganucheau prepare you to fall in love. 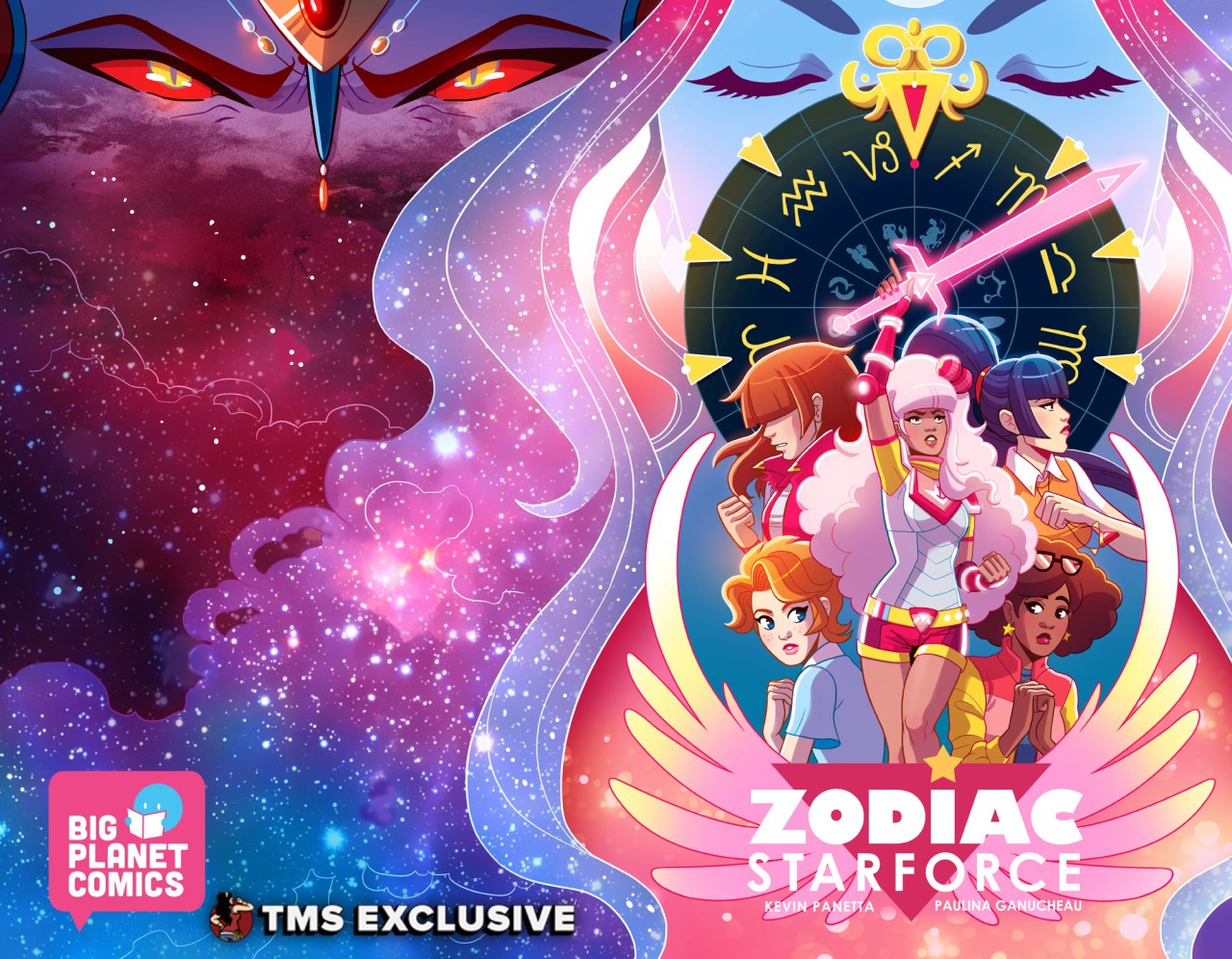 There’s a new magical girl squad out there, so have your epic transformations and super-cute powers at the ready! Dark Horse is granting all of our greatest comic wishes with Zodiac Starforce (described as Sailor Moon meets Buffy meets Lumberjanes!), and we got the chance to speak with Kevin Panetta and Paulina Ganucheau, the co-creators and creative team behind the new title.

Sam Maggs (TMS): What can you tell me about Emma and her gang of magical girls?

Kevin Panetta: Hi! So Emma, Kim, Molly and Savanna are Zodiac Starforce, a group of friends with magical powers who get thrown into a crazy world of demons and evil goddesses. They are really good at beating up bad guys. So good that they kind of beat up ALL the bad guys and save the world. So when our story starts, the team is actually broken up and trying to get back to their normal lives.

Paulina Ganucheau: I love that we’re introduced to these girls as an already seasoned team. Origin stories are OUT.

Panetta: We actually started out with a big ol’ origin story, but I think we’ve seen that a LOT. Sailor Moon and Cardcaptor Sakura both start out as HUGE origin stories.

Ganucheau: And they do it really well, so why touch it.

Panetta: Exactly haha. So when we start it’s been YEARS since the team has seen any action. Some people, like Emma, are really happy about that. She had some bad stuff happen to her during their first go around and she really doesn’t want to be a hero anymore. So when monsters show up out of nowhere and attack their town, it’s up to the girls to decide whether to just ignore it or to become a team again. 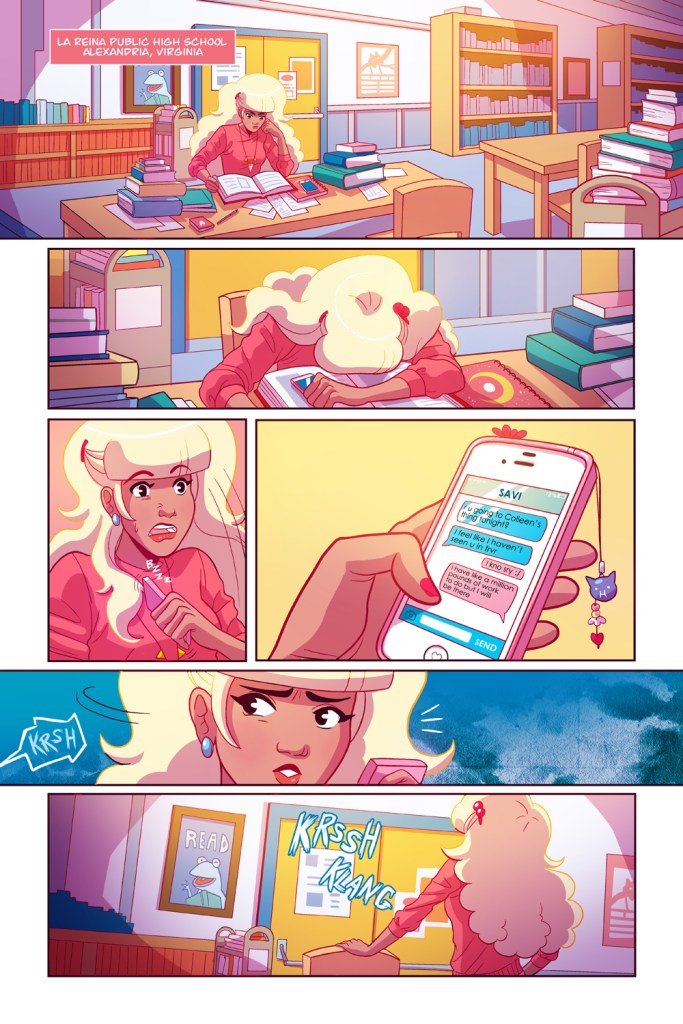 TMS: Do they each have their own specific power tied to their personalities?

Ganucheau: Their powers are linked to their zodiac signs, so definitely in some respects. We tried not to be TOO rigid in sticking to personality archetypes of the zodiac signs, but it’s definitely a part of who they are.

Panetta: Emma, for example, has some pretty serious Gemini stuff going on. She is split between two worlds but is also very adaptable to situations. I think that’s why she’s a good leader. She also has a really cool Gemini power. Should we say what it is?

Ganucheau: She can split into TWO PEOPLE! Wait, did I ruin it?

Panetta: I dunno. Probably, but I don’t care. IT’S TIME TO SPILL THE BEANS.

Ganucheau: Let’s talk about them MORE, then. One of my favorites is Kim. Taurus. She has bull armor made out of pure energy. Super excited to draw that.

Panetta: Kim is also very stubborn and very loyal. I’m not a Taurus, but Kim is basically me. Hard headed and a big fan of Godzilla movies.

Ganucheau: Aries and Pisces all have awesome powers, too, but we don’t wanna give away EVERYTHING. 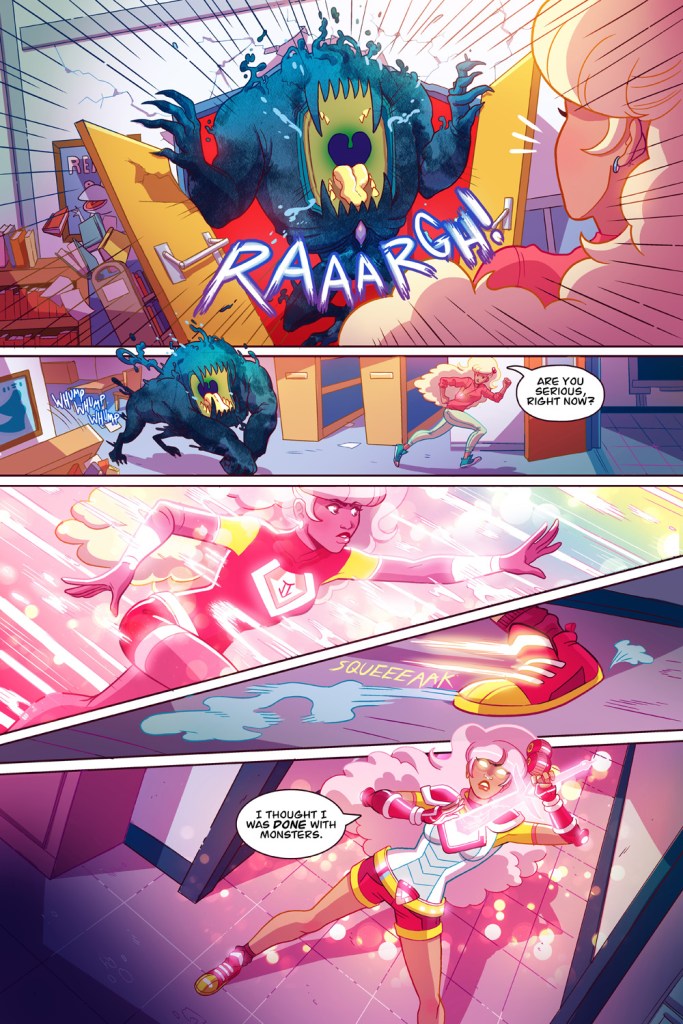 TMS: We also get some hardcore female villains in Zodiac Starforce. Can you tell us a bit about Diana and her “mean girls?”

Panetta: Yesss. I love Diana haha. I mean, she’s evil and stuff but she’s also pretty great. So besides all these monsters showing up out of nowhere, Diana is amassing an army of jerks who follow her around everywhere.

Panetta: All I’m gonna say is there’s a lot more to Diana than just being a regular evil mean girl. She’s got a big chip on her shoulder and is holding some pretty intense grudges. 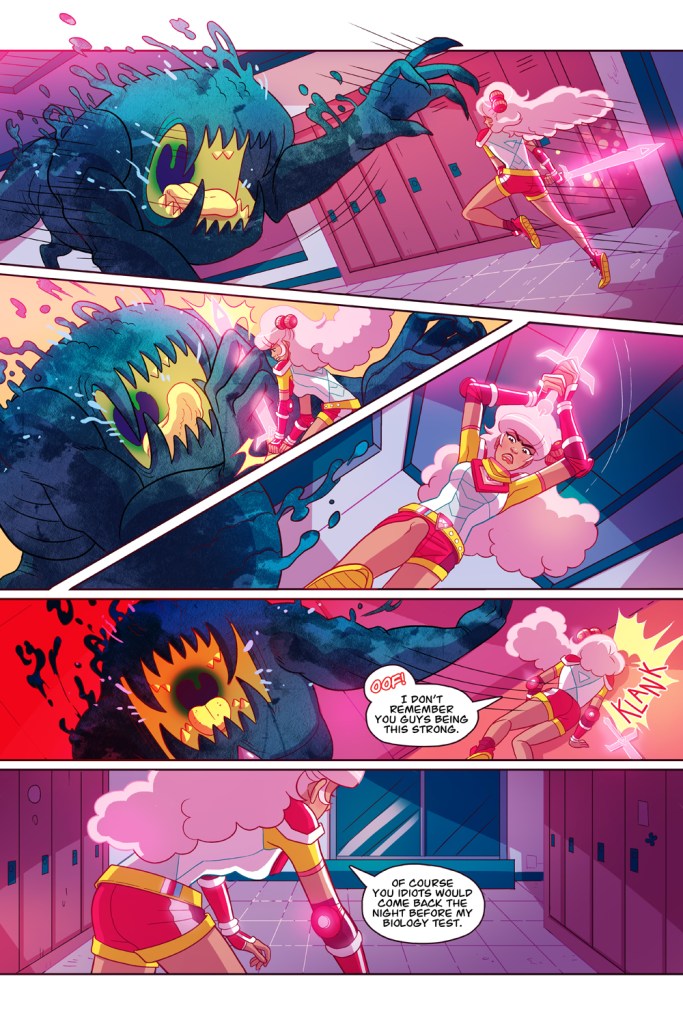 TMS: Sailor Moon meets Buffy sounds like you made this comic specifically for me. Can you talk a little about why creating a kick-butt magical girl squad was important to you both?

Ganucheau: Sailor Moon, Buffy and just women being amazing are my favorite things. Creating and being part of a story like this is what I’ve been building up to my whole life. If I could go back in time to baby Paulina drawing her own Sailor Moon comics and tell her that she is doing a magical girl story being published by Dark Horse, she’d probably freak out.

Panetta: I think when adult Paulina found out, she freaked out, too.

Ganucheau: I may have still been drawing my own Sailor Moon comics. There’s no way of knowing. And I definitely freaked out. I’m still in awe.

Panetta: Me too. I’m the HUGEST Buffy fan and it’s such a big influence on what I write. When Paulina and I first started talking about doing a magical girl comic, I was probably rewatching all of Buffy for the fourth time, so I’m sure that influenced this story a LOT. I’m also kind of obsessed with Avatar: The Last Airbender and Legend of Korra, so I think ensemble stories with awesome girls kicking butt is just in my DNA!

TMS: Was diversity important to you when creating these characters in writing and on the page?

Panetta: Definitely. Especially when creating a kids comic, we wanted to make something that’s for everybody.

Ganucheau: Absolutely. A child or any one person should be able to look at a book, especially a team book like this, and see themselves in it. 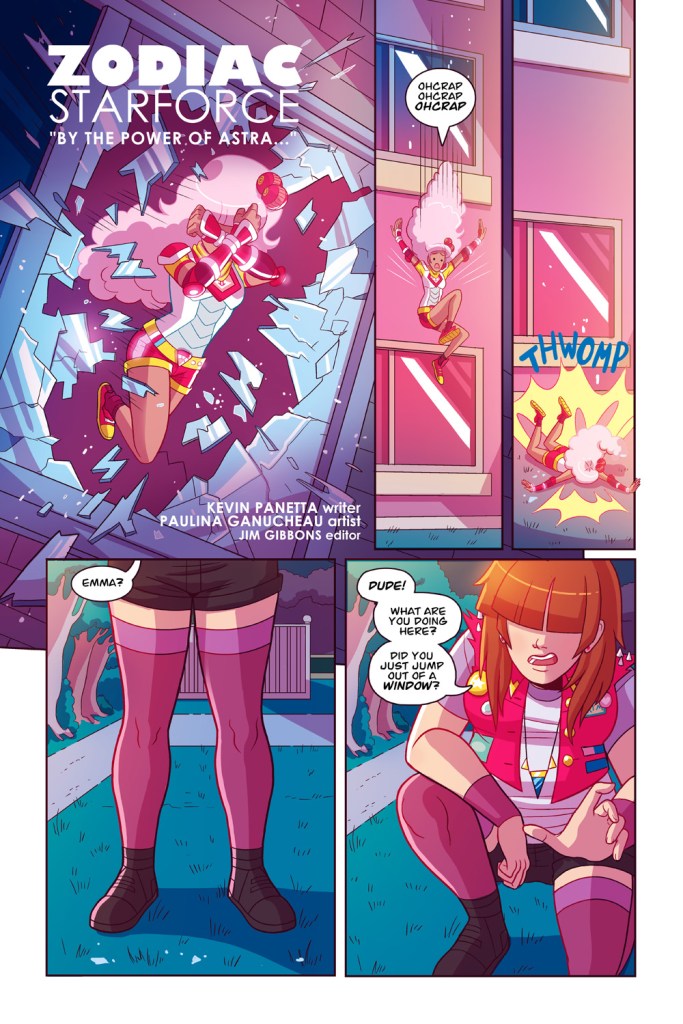 TMS: Who are your favorite magical girls from fiction?

Panetta: I love Sailor Moon and Cardcaptor Sakura and a lot of traditional magical girls, but a lot of my faves are all over the place. Niko and Karolina from Runaways, Katara and Toph from Avatar, Korra, and of course Buffy and Willow. Why aren’t we just all talking about how awesome Willow is all day long? She’s the best.

Ganucheau: Willow is the greatest. Don’t even get me started. My favorites, though… You got an hour? Okay, no seriously: Sailor Moon. I know it’s kinda cliche to say the most popular magical girl in existence, but she truly is my favorite. Just what she stands for, who she is, where her power is rooted. She’s just pure love. I adore her.

Panetta: I hope that with Zodiac Starforce, we can take all those things we love and really create something new. If even ONE kid loved Zodiac Starforce the way that Paulina loves Sailor Moon, it would be the best feeling in the world.