Star wars... what are they good for? 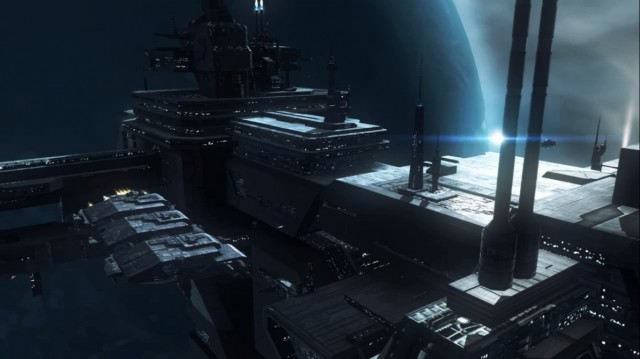 Yesterday, two fleets of starships waged the biggest battle in history, and it might only be the beginning of the war. Massively multiplayer online space simulator EVE Online saw thousands of players engage in a titanic struggle over a strategically insignificant star system called 6VDT.

The conflict between the game’s biggest alliances has been building for months, and they elected to bring it all out in the open on July 28th. The TEST Alliance tried in vain to fight off an incursion by the CFC (it stands for ClusterF**k Coalition, because even though EVE is serious business, these are still video gamers). After several hours of fighting over 6VDT, CFC decided to send in a fleet of its valuable capital ships, effectively committing their full resources to the fight. At that point, TEST and its allies realized it was over and tried to flee, but it was too late for many, and 2900 ships were destroyed by the end of the battle.

Due to EVE‘s famously sophisticated virtual economy and its real-money exchange, it’s possible to calculate the real-money costs of losing ships and resources (though rather few of the players care much about the money), and it’s a fair bet that the losses will total billions or trillions of in-game currency — somewhere along the order of tens of thousands of dollars in real life assets. The losses will definitely top those sustained during the Battle of Asakai in January, where over 3000 ships engaged in battle after a CFC capital ship’s pilot pressed the wrong button and accidentally jumped into enemy territory, costing the unlucky skipper years of work that could be considered equivalent to $7600 in real money.

Vily, a prominent commander in CFC’s Goonswarm, a faction affiliated with the Something Awful forums, posted his own precise, analytical report on the battle. “This battle is the culmination of what will likely be called the Fountain War, a war that has raged for two months and represents one of the most dynamic conflicts of EVE Online in the last two years.”

It wasn’t as fast-paced as we imagine space battles to be — when EVE players say the minutes of battle seemed to last for hours, they mean that literally. In order to handle large-scale conflicts, the EVE servers use “time dilation” to slow time to a crawl for players involved. The battle slowed down to as low as 10% of normal game speed, plus further subjective delays due to the game carrying out orders in the sequence they were given, while the rest of the game went on normally.

BoodaBooda, a leader of TEST, acknowledged their defeat in a speech and set out a course for restructuring their leadership and organizing a defense of their core territory. Though they lost, TEST took this battle as a way to demonstrate their ability to rally the troops and give everyone a show while doing so. It seems to be well understood that CFC is going to keep pushing forward in the near future, and more battles are on the way.

(The Verge via BBC News, image by articpenguin via Flickr)