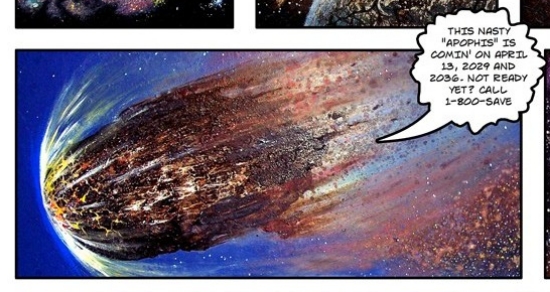 A proposed mission by the European Space Agency seeks to send a pair of spacecraft out to a nearby asteroid to test the effects of smashing one of the crafts into the asteroid at 6.25 km/second. The primary goal is to see how well a possible method of asteroid deflection would work, but it won’t do anything as spectacular as actually blowing up the asteroid. I guess they’re saving that honor for Bruce Willis.

The plan, called Asteroid Impact and Deflection Assessment (AIDA), would send the pair of spacecraft to the asteroid 65803 Didymos, which is actually a binary system, with one smaller mass orbiting a larger one. The smaller of the two objects will be the one targeted by the mission.

The crafts themselves are named Double Asteroid Redirection Test (DART) and Asteroid Impact Monitor (AIM). If you can’t guess by the names, DART will be the one smashing into the asteroid while AIM stays a close but safe distance away to monitor the impact, and possible deflection of the Didymos asteroid.

DART isn’t just going down. It’s going down in flames, or rather it’s going down in vapor. The impact at 6.25 km/second will be considered “hypervelocity” so DART won’t explode when it hits Didymos, it will be completely vaporized and turned into plasma. Tough break, DART.

While Didymos does not pose a threat to Earth, the information gained from this mission could lead to our ability to deflect asteroids that are. The asteroid Apophis is due for close passes to Earth in 2029 and 2036. It’s expected to pass safely by us both times, but it would be pretty great if we had the ability to deflect asteroids by the time Apophis swings by again — just in case.

Vaporizing the DART spacecraft is only the beginning of a larger project. The ESA is taking suggestions for additional experiments they can do with the AIM spacecraft, or maybe even DART before it gets vaporized. They’ll be formally taking these suggestions beginning February 1st, but until then they’re also listening to the public’s comments on the mission.

Our comment, ESA, is that you should send Bruce Willis to blow up Apophis.