Toshiba Has a Copy Machine That Erases Its Copies 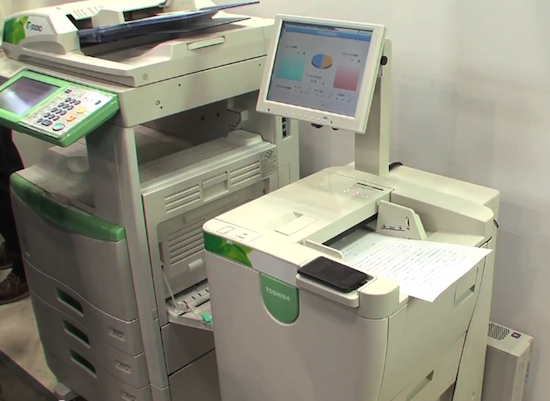 In our digital age, the printed word has a powerful sense of permanence — even the humble copied page. However, Toshiba’s new copy-scanner-eraser device challenges that very notion by using a special toner that disappears when quickly heated. The result is a copy machine that can erase what it copies — and even render the ink from certain erasable pens invisible as well. Our world might never be the same.

Obviously, the scheme has some major drawbacks. Namely, that the ink is merely rendered invisible and not actually removed. This means that a vague trace, and indentation, can still be seen on the paper. However, the eraser also has the ability to scan the erased documents as it erases them, which is a particularly useful feature as it removes the risk of losing valuable documents — erased or otherwise.

Though the ability to reuse paper is certainly a noble goal, the Toshiba scheme is a closed system. You have to use their toner on their machines to make it work. Thus, the actual sustainability of the processes is limited. Not to mention that the price of paper is nothing compared to the price of toner cartridges, which limits the economics of Toshiba’s argument.

That said, it’s still kind of mindblowing to see a paper stripped so completely of text. In this brave new world, text is no longer sacrosanct. First boring, useless copies, tomorrow: The founding documents of our democracy, seminal religious texts, and the collected works of Dean Koontz.