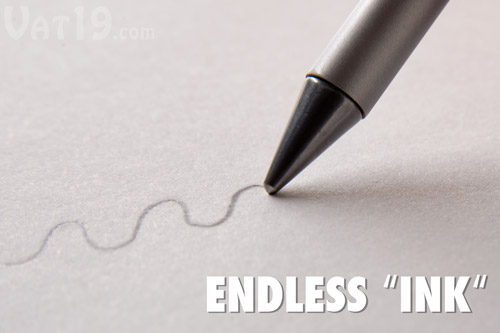 Vat19, self-proclaimed “purveyors of curiously awesome products,” has released a pen that has dispensed with ink and writes with a metal alloy tip, boasting that it lasts a lifetime.

As one writes with the pen, it leaves behind a trail of tiny metal “deposits,” which look similar to a pencil in color, but cannot be erased, cannot be smudged, can write upside-down and can even write underwater. The pen never goes dull, though if one desires a sharper tip, they can simply refine the point with sandpaper.The pen reportedly has trace amounts of lead, which was taken out of pencils due to its dangerous nature, but as the site’s FAQ states:

Yes, lead is dangerous if you eat copious amounts of it. The same is true of hamburgers. However, because of this danger, we strongly warn against allowing children to use the Inkless Metal Pen (despite the fact that the amount of lead in the Inkless Metal Pen is miniscule). A child could put the tip in their mouths. They may also drive too fast after they get their driver’s license…

Note that some Wired commenters report that the pen’s writing is a little too light for their liking.

The product is also accompanied by a humorous video, seen below.

The pen sells from the Vat19 site for $27.95. It is currently sold out, but the site provides a handy notification feature for when it’s back in stock.