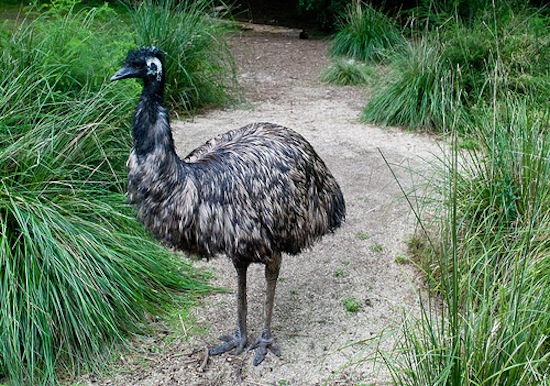 Staff at Australia’s Featherdale Wildlife Park are scratching their heads over the recent theft of one of their emus. How the bird burglars carried a bird the size of a small ostrich over an electrified barbed wire fence in the dead of night while avoiding a guard and security camera is one good question, but there’s an even better one — why would anyone steal an emu in the first place?

To steal the large, flightless bird, thieves would have had to break in over a high fence topped with electrified barbed wire, which sounds to us like a little much as far as security for a bird ranch goes. Apparently not, though, as the emu thieves not only broke in, but proceeded to wrangle an enormous bird and escape with it to a getaway vehicle parked a half a mile away. Which, while pretty dumb, is also pretty ballsy. For reference, here is what an upset emu looks like:

Not the sort of animal we would want to lug over a fence topped with electrified barbed wire, but we’re the risk averse sort.

More confusing than the how of the theft, though, is the why. Despite making a pretty tasty burger — seriously, try one if you ever get the chance — emus aren’t worth much on the open market, as they’re pretty common creatures, leaving park officials clueless on why anyone would go to the trouble of planning what is a pretty involved heist when the payoff is a single angry, confused flightless bird.

Considering the combination of careful planning and utter stupidity that went into the theft, we’re left with one suspect: teenagers. Mostly because if we were Australian teenagers, this is exactly the kind of thing we would get up to — a more involved, and thus more worthwhile, version of cow tipping. With that in mind, we have one suggestion for Featherdale Wildlife Park: get a Ronald McDonald statue. They’re a great decoy for thieving teenagers —  they pretty much won’t be able to help themselves.

Plus, the sight of a lone clown standing sentinel in rural Australia, his dead, unblinking eyes surveying his domain is a better deterrent than any electric fence. After all, high schoolers are a superstitious and cowardly lot.