Empowering “Hostage Girl”: Why We Need to Subvert Woman-As-Prize Tropes 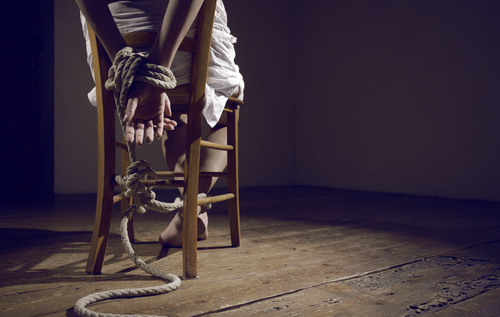 I enjoy telling people I write superheroes. Wait, like comic books? No, they’re novels. About, like, Batman? I can’t afford Batman and I’m afraid of lawyers, so definitely not. Please don’t come after me, DC. You make up your own? Yup. My characters have archetypical powers, but they’re home-grown and possibly more delicious for it. So what’s your superhero’s name? Oh, she goes by Hostage Girl.

Did you know it’s possible to actually see that record scratch sound effect on people’s faces? It’s kind of amazing, actually. But my hero is Hostage Girl. She’d prefer to be called Gail, she lives in Chicago, and for four years, she was kidnapped by every supervillain in town. Usually the same superhero saved her: a tall, green-eyed man in black that the media were absolutely convinced was Gail’s tall, green-eyed boyfriend Jeremy in disguise. It happened so often that the media forgot her real name, dubbing her Hostage Girl.

In the first book (Superheroes Anonymous) said hero and Gail’s boyfriend both permanently leave town in hopes that the villains will stop kidnapping her. It’s almost successful! But not all villains keep up with the news. The book really kicks into gear when Gail ends up in the hands of a mad scientist; one encounter with some unstable super goo and a bad acid trip later, this damsel in distress now has new and unusual superpowers. She becomes something she’s never been: no longer helpless. Her powers send her from super-hostage to superhero.

People have asked me if this was a deliberate choice. It was.

Growing up, even though I loved Xena: Warrior Princess and the original Power Rangers (Team Trini for life!), I noticed a trend in a lot of other TV shows and movies. Though there were exceptions, men received the Hero’s Journey, while oftentimes women…got the pleasure of being held hostage. It was like they existed to be kidnapped or put in danger. Prizes for the men to win, bargaining chips for the villain to use against the hero. It creates drama, people used to tell me, and stakes! And it’s passionate and you cheer for the hero when he’s successful!

And at this point in my life, I’d rather watch paint dry.

I don’t want to watch women struggle against their chains and be saved—or worse, killed off to cause the men in their stories pain. That’s overdone and monotonous. I want to see them in the middle of the fight kicking ass right alongside or instead of the men. I want them to get their own “Hell yeah!” moments that have to do with things they’ve done rather than what their male counterparts have accomplished.

When I say “kicking ass,” I don’t always mean that literally. I have a drinking game: I take a sip every time I hear the phrase “Strong Female Character.” This has made being on panels about writing Strong Female Characters (sip) difficult, but at least I’m disgustingly well-hydrated by the end. A common misconception means a Strong Female Character (sip) must be somebody played by Michelle Rodriguez who kicks all the butt like Rodriguez’s character inevitably will. “Strong” doesn’t have to be literal. I hereby offer up a litany of better terms to use: nuanced, well-rounded, fully-developed, individual, unique, realistic, actualized, memorable.

For me, Strong Female Character (sip) means women that are allowed to do more than lay down on the railroad tracks like Sweet Sue does whenever Salty Sam ties her up. Dr. Ellie Sattler and Lex from Jurassic Park don’t require kung fu to be badass paleontologists and hackers. They bring more with their respective skills than they ever would if all they did was serve as hostages for the men to save.

Unsurprisingly, superhero fiction is a large proponent of this women-as-hostages problem. Powered individuals that fly and fight, conjure fire, teleport, they do all of the things we mere mortals wish to do, and sometimes what we wish to do is save somebody and be viewed as a hero. But embedded even deeper into that is the superhero/alter-ego duality: a superhero must keep his or her powers a secret, especially from loved ones. This naturally leads to many situations where said loved ones—usually female, if we’re being honest—are placed into dangerous situations because they’re unaware of their connection to the hero.

At the beginning of the Superheroes Anonymous series, Gail Godwin is that loved one kept in the dark. A reader asked why I chose not to start the books with her first kidnapping. After all, an origin story proves an easy access point, especially in a superhero story. On the one hand, she had a point. On the other hand, how many times have we seen Uncle Ben die?

In Gail’s case, my goal was to poke fun at the glut of kidnappings characters like Lois Lane and Mary Jane Watson and 616-Universe Gwen Stacy face. Gail goes from being one of their number to joining the hero ranks, a true hybrid. She has all of the fun (well, okay, traumatic) stories that come with being the damsel in distress and years of practice in dealing with supervillains face-to-face (there’s lots of downtime waiting for heroes to arrive). Her background is a lens to examine her new powers and what she can do with them, and what she should do with them. For years, she was Hostage Girl, a faceless and nameless female whose only function was to serve as an object to be rescued.

Now she’s moved beyond that, and it’s up to her to craft her own story, something I wish more women stuck in these narratives got a chance to do. How to Save the World may not be an actual guide, but in it, Gail finally learns how to leave her damsel in distress identity behind. And hopefully she’ll get a cooler name than Hostage Girl, so I can stop surprising people that ask me about my superheroes.

Lexie Dunne is a life-long winner of the coveted trophy for participation and author of the Superheroes Anonymous series. By day a mild-mannered technical writer and by night a writer of masked crusaders, she hails from St. Louis, home of the world’s largest croquet game piece. HOW TO SAVE THE WORLD is available from HarperCollins now. Follow her on Twitter @DunneWriting.