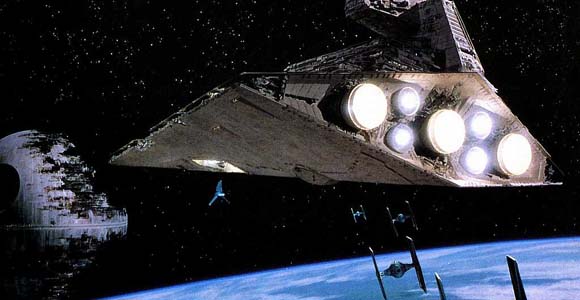 We were perfectly content, nay, tickled pink by the response the Unites States government issued after a petition to get them to build a Death Star warranted an official statement be made. Never did we expect the Empire to issue their own response. You’ll probably want to read this…

The reply was issued via StarWars.com under the title “Planet Earth Abandons Death Star Project In Face Of Superior Galactic Imperial Power.” I think you can guess how this is going to read:

IMPERIAL CENTER, CORUSCANT – The overwhelming military superiority of the Galactic Empire has been confirmed once again by the recent announcement by the President of the United States that his nation would not attempt to build a Death Star, despite the bellicose demands of the people of his tiny, aggressive planet. “It is doubtless that such a technological terror in the hands of so primitive a world would be used to upset the peace and sanctity of the citizens of the Galactic Empire,“ said Governor Wilhuff Tarkin of the Outer Rim Territories. “Such destructive power can only be wielded to protect and defend by so enlightened a leader as Emperor Palpatine.”

Representatives on behalf of the nation-state leader from the unimaginatively named planet refused to acknowledge the obvious cowardice of their choice, preferring instead to attribute the decision to fiscal responsibility. “The costs of construction they cited were ridiculously overestimated, though I suppose we must keep in mind that this miniscule planet does not have our massive means of production,” added Admiral Conan Motti of the Imperial Starfleet.

Emissaries of the Emperor also caution any seditious elements within the Galactic Senate not to believe Earth’s exaggerated claims of there being a weakness in the Death Star design. “Any attacks made upon such a station — should one ever be built — would be a useless gesture,” added Motti.

We’re not gonna let them talk to us that way, are we?