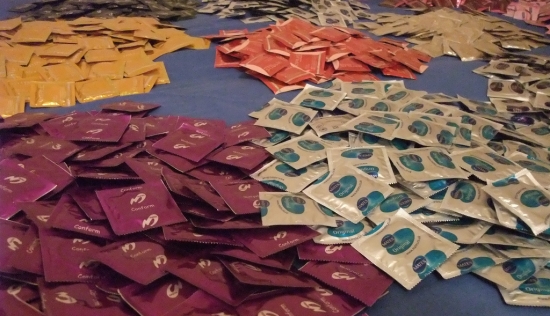 Never fear, College of New Jersey students. If you find yourself without protection in the heat of the moment, one man has you covered, so to speak. TCNJ sophomore Kyle McCabe has started the company Condam.net, an emergency condom delivery service. If you need a condom, he delivers you one. It should take this kid an extra twenty minutes to walk to class because of all the high fives he constantly receives.

Sometimes college students find themselves in need of a condom, but as McCabe points out, they’re not always easy to come by at the last minute. Many college health service departments offer students condoms, but they’re not always open, and if a student doesn’t have a car, they might not be able to leave campus to make a condom run. So there’s a hole in condom availability on campus, and McCabe is really hoping he can get in there and fill that hole. That’s why he started Condam, a combination of “condom” and “ambulance.”

You can see McCabe in action in this video by the Associated Press:

So why does McCabe do this? For money. But also because he’s the sophomore the College of New Jersey deserves, but not the one it needs right now. So he’ll deliver condoms. Because students will pay him to do so. Because he’s not a hero. He’s a silent guardian, except when he has a blue light on his helmet, a watchful protector. A condom ambulance.