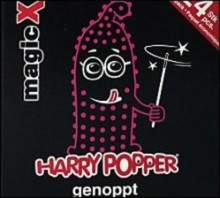 Warner Brothers, the media behemoth that owns the rights to the Harry Potter movie franchise, is reportedly in the midst of fighting a legal battle against a Swiss company for copyright infringement. What did these neutral, chocolate-loving, particle-accelerating people do to earn their ire? Why, they simply created a line of condoms which prominently feature a cartoon likeness of Harry Potter.

Not much is known about the product, but the name “Harry Popper” is clearly emblazoned across the packaging. Judging by the drawing, prominent features include a textured dot pattern, as well as an oversized reservoir tip large enough for the whole family that you won’t be having if the product works as advertised. All the non-prophylactic attributes are dead ringer for Harry Potter. I mean, come on, generic round glasses, one missing arm, inexplicable look of hunger… The drawing was so uncanny, I actually thought for a split second that it was alternative poster artwork for Harry Potter and the Half-Blood Prince.

Have the good folks at Warner Brothers forgotten what parody looks like? I mean, if Homer Simpson was allowed to rename Spider Pig to Harry Plopper without any problem, why can’t the Swiss sell a condom named Harry Popper? It’s as if associating Harry Potter with a farm animal is fine and dandy, but make the jump to sexual intercourse and all hell breaks loose.