For the First Time, Creature Without Brain Demonstrates Memory 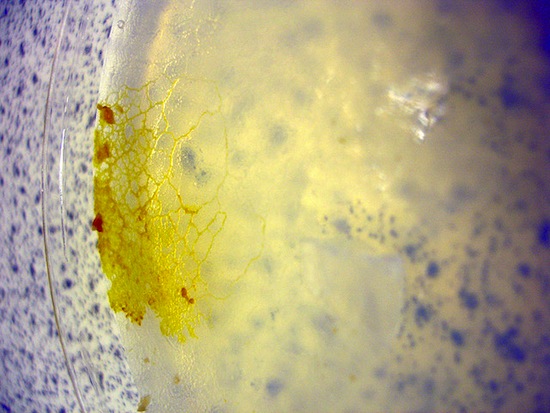 The slime mold Physarum polycephalum is not traditionally regarded as exactly the brightest of life forms. Much of this perception has to do with the fact that a slime mold is a single-celled organism that has no brain or neural structure, which is really a pretty solid reason not to give a creature much credit in the intellect department. Despite this, though, slime mold has proven surprisingly capable of solving simple tests and mazes in lab settings. Now, researchers have even uncovered evidence that the mold doesn’t need a brain to demonstrate that it uses memory as a problem solving tool, a feat you can check out in a video after the break.

Without a brain, it’s hard to understand where slime molds would store the information they need to find the easiest routes to nearby food sources. When looking for food and faced with a simple obstacle — like the U-shaped trap in the video below — slime molds rarely retrace their steps, making their paths to sustenance more efficient than one would think. Rather than wandering aimlessly over covered ground, or covered agar medium as it were, slime molds know to ignore paths they’ve already explored in favor of territory they haven’t tested yet.

Since it seems like this sort of navigation should require a brain to store information about where the mold has been, and since brains are not among the many fine attributes of slime molds, it’s been a mystery how they steer themselves away from unproductive routes until now. It turns out, the mold remembers by reading the slime trail it leaves behind. That trail has different chemical qualities depending on whether or not the mold was sensing food when the trail was laid down. By reading these qualities when it encounters a trail it has laid down previously, the mold knows whether it is on the right track or not, effectively turning its own trail into a memory of where it has been — or at least the gooiest version of a Post-It note we’re aware off.

It’s the first time a creature without a brain has demonstrated memory, and the molds appear to be pretty dependent on those memories for not starving to death. While molds that were allowed to use their own trails for navigation solved the puzzle and found the bait nearly without fail —  96% of the time — those that were cleaned up after by researchers and had to search without their trails made it to the food just one third of the time.