Scientists Measure Force of Cell Division, Prove We Could Totally Take Cells in a Fight 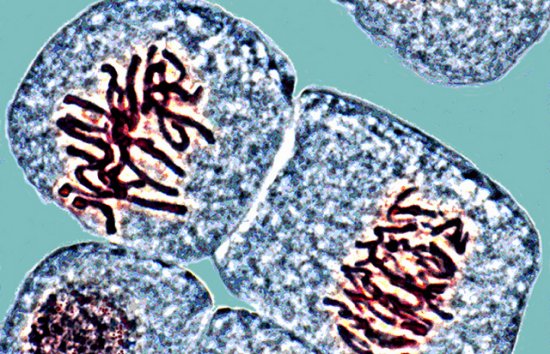 Anyone who passed high school biology knows cells divide through mitosis, but new research has measured the strength of the forces at work when cells divide. A pair of scientists at the University of Tokyo in Japan looked at how slime mold Dictyostelium divides, and how it musters the strength to rip itself in half. Slime mold is a lot of things, but it turns out it’s not very strong. It’s downright weak. We’re not afraid of you, slime mold.

Using a technique known as traction force microscopy, Hirokazu Tanimoto and Masaki Sano witnessed the Dictyoselium go through its division process on a fluorescent bead embedded surface. Using this setup, they were able to measure the force the cells used when dividing. The more the beads on the surface were distorted, the more force the cell used to divide. Cells are incredibly small and don’t have much mass, so as one would expect, they don’t generate a lot of force.

The Dictyoselium cells have tiny projections they use to move, and when dividing they utilize those feet in opposing directions. When moving, the cells use roughly 10 nanonewtons of force. That force doubles to around 20 nanonewtons for cell division. To give an idea of the strength of 20 nanonewtons, Tanimoto says humans use about 100 billion times that amount of force in a game of tug of war.

If you ever need a pick-me-up, just remember how much stronger you are than a dividing Dictyoselium cell. If you’re ambitious and have access to slime mold, why not try to culture enough Dictyoselium cells to really give you a run for your money in tug of war? What’s the worst that could happen?

(via New Scientist, image via UNED)