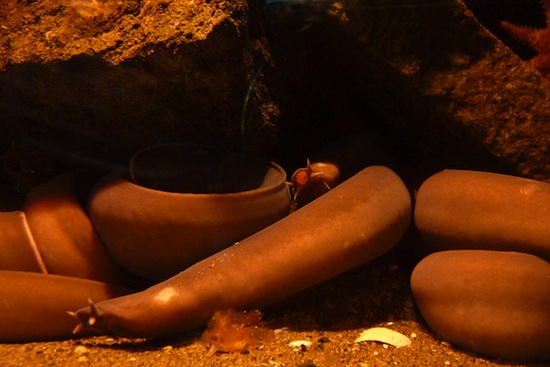 Does wearing a pair of pants woven from the mucky slime produced by a nervous hagfish sound awesome to you? …Yeah, it’s not really a turn on for us, either. That’s not stopping researchers at Canada’s Guelph University from working to make that possibility an utterly vile reality by transforming the thick, mucus-like strands of sticky slime produced by hagfish as a defense mechanism into a super-strong fabric of the future.

Hagfish are scavenging, eyeless, eel-like creatures without, frankly, a lot of qualities that recommend them as party guests. What they do have going for them is one hell of an effective defense mechanism. When a hagfish is threatened, it releases a sticky slime from its body. The slime is actually a protein that, on contact with water, turns into rough, ropy strands of fibrous material that can choke or clog the gills of a potential predator, driving them off to search for prey that doesn’t explode like a Gusher filled with snot and evil when they bite into it.  You can take a look at the defense mechanism below, which not only demonstrates the hagfish’s capabilities for defending itself, but assures us all that their is a look that fish can give that universally translates to “Ahhhk. AAAAUUUGGHHHH. UHK. Oh, God, oh, God it’s in my MOUTH!”

At Guelph University, though, Atsuko Negishi and his team are trying to turn that slimy protein to a more practical use than “grossing out fish.” The researchers report in the latest issue of the journal Biomacromolecules that they have been able to harvest slime proteins from the hagfish and then spin it out on their own. When the water is removed from the spun out fibers, researchers are left with a silk-like substance that they hope could one day replace synthetic, petroleum-based fibers. Watch out, polyester — your days could be numbered, because nothing makes as much sense as a leisure suit crafted from the finest hagfish slime.

Negishi’s work right now is just a proof of concept, so don’t expect to get a pair of hagfish slime leggings in time for the holidays or anything. The Guelph team hopes to continue research into the qualities of the hagfish slime, though, with an eye towards one day understanding what give it its strength and other unique qualities and producing it on an industrial scale.