Electric Man Is the Small Scottish Indie Film the Internet Deserves, and the One It Needs Right Now 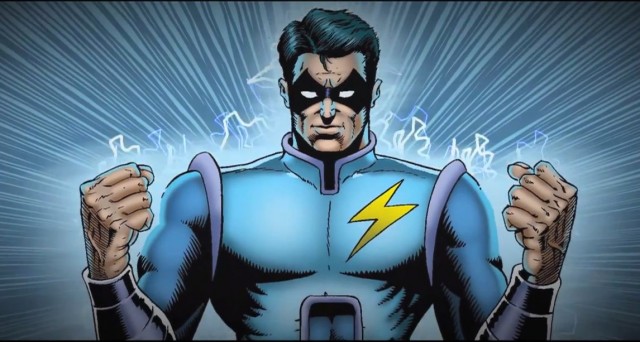 What if Dante and Randal from Clerks were Scottish, ran a comic book shop, and were involved in a caper? Well then you’d have Electric Man, and that’s actually something you’re probably going to want to get your hands on. It’s available on DVD now.

Electric Man tells the story of Jazz and Wolf, two twenty-somethings who run a small comic book store in Edinburgh, Scotland called Deadhead Comics. They’re about to lose the shop if they can’t pay for some repairs that need to be done, and things aren’t looking great. The pair head to a local comic convention to try to sell off their back issues. They don’t do well in terms of sales, but through a series of mishaps they find themselves in possession of Electric Man #1 estimated to be worth £100,000.

The comic places them in the middle of an underhanded world of inheritance disputes, black market dealings, and possibly murder.

An underhanded deal to sell the comic at the convention is interrupted by a mysterious woman who gets a little kid to steal Electric Man in the middle of the deal. The buyer and seller chase the kid through the convention and he stashes the comic in one of the boxes belonging to the boys of Deadhead Comics. The buyer, seller, and woman all trace the comic to Jazz and Wolf, and they’re willing to do anything to get it back.

Electric Man takes a film noir-style pulp story along the lines of The Maltese Falcon (if the titular falcon were a comic book and not a statue) and sets it in the lazy, pop-culture-referencing world of something like Clerks. It doesn’t really do either one perfectly, but it’s fun enough that you’re willing to forgive it its flaws.

Take a look at the trailer to get a better sense of the unique tone of the film:

Electric Man is clearly a small indie film, but it’s genuinely charming enough to stand on its own in a field of huge-budget movies. It’s more about people who love comics than it is about comics themselves, but we’re pretty sure it’s something our audience would enjoy.

@glentickle Hi Glen. Electric Man will also be available on iTunes, XBox. PS3 and Vudu on the 15th October.

So there you have it. Besides the DVD you can also stream it through a number of platforms starting October 15th.