Give Us Your Best “Swear To Me!!!” and You Could Win The Dark Knight Trilogy: Ultimate Collector’s Edition Blu-ray 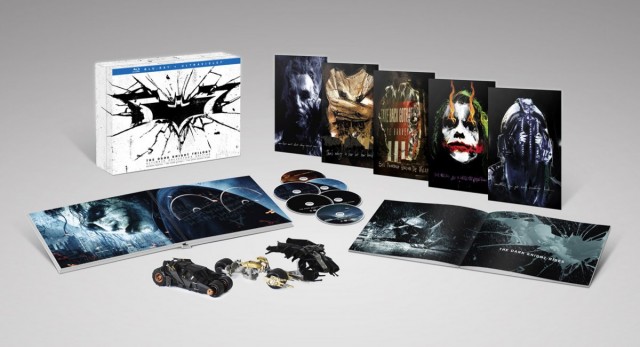 Our friends at Warner Bros. are hooking us up with two copies of The Dark Knight Trilogy: Ultimate Collector’s Edition and we’re giving them away. All you have to do is Tweet a Vine of yourself screaming “Swear to me!!!” in your best Batman voice for our entertainment.

The Dark Knight Trilogy: Ultimate Collector’s Edition is insane. It comes with all three movies on Blu-ray as well as brand new special features. There are three new featurettes:

The Fire Rises: The Creation and Impact of The Dark Knight Trilogy which includes interviews with Guillermo Del Toro, Michael Mann, Zack Snyder, and more.

Christopher Nolan & Richard Donner: A Conversation where the two directors discuss bringing Batman and Superman to the big screen.

Besides the visual content you also get Hot Wheels of The Tumbler, Batpod, and the Bat; Mondo art cards of the villains from the films; and a 48-page hardcover book of production stills and behind the scenes images.

You want this set.

It’s simple. First, follow us on Twitter @Geekosystem. This is because we want all of the followers, but it’s also required so we can contact the winners. If you don’t follow us, we can’t DM you that you’ve won, and we’ll give the prize to someone else. It’s happened before. Don’t become a statistic.

Now that you’re following us on Twitter, post a Vine of yourself shouting “Swear to me!!!” in your best gravelly Christian Bale Batman voice and tweet it with the hashtag #batgeekgiveaway. We’ll pick two winners next Friday, October 4th and post their winning vines on the site along with any honorable mentions we think need to be shared with the Internet.

If you don’t have Twitter or Vine, don’t worry– you can still enter. Just get Twitter and Vine. They’re free!

Unfortunately, Warner Bros is restricting the contest to U.S. residents only. Our apologies to our international readers.

And hey, if you don’t win you can always just buy the collection, because everyone needs a Tumbler Hot Wheels.

Thanks to Warner Bros. for setting this up, and we’re really looking forward to watching a bunch of silly looping Vines of readers shouting like Batman.