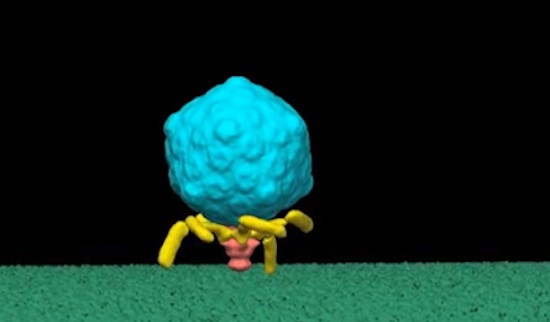 The process that the viruses use to infect cells has been observed in new detail for the first time by researchers at the University of Texas, and as you might expect, it is super creepy. Keep reading for a video simluation of the process, in which the virus unfolds six hairlike feelers from its body — like some terrible, invading War of the Worlds mech — as it attaches to a cell, and then uses them to walk along the cell surface, probing and prodding until it finds the perfect site to deliver its infectious payload, turning an unsuspecting cell into a living nightmare death machine built only to create more viruses. On the plus side, this is strangely comforting, as it means that viruses work pretty much exactly like they do in our heads — in the most troubling manner possible. On the minus side? EUUUUUUGGGGHHHH.

Oh, it gets worse though. When the virus finds a chink in the cellular wall that makes a good place to settle in, it basically ejects it’s guts, transforming them into a tube that punctures the armor of the cell, and then uses that tube as a way to inject it’s own DNA into the cytoplasm of the cell, hijacking it to produce more copies of the virus. Just watch — it’s about as hideous as computer animation can get.

The University of Texas team published their work — which demonstrates the previously proposed notion of a virus “walking” a cell’s surface to find and infection site for the first time — in Science Express this week. They’re hopeful that the work can be applied to other viruses as well, giving researchers a better idea of how viruses infect cells that could not only help protect people from infections in the future, but also offer insights into how engineered viruses can be most effectively weaponized against diseases like cancer.

UPDATE: An earlier version of this article identified E. coli as a virus, while the video is actually of a virus infecting an E. coli bacterium. We apologize for the error, and thank our readers for always keeping us on our toes, especially when it’s very early and our toes haven’t gotten enough sleep.

(via University of Texas)