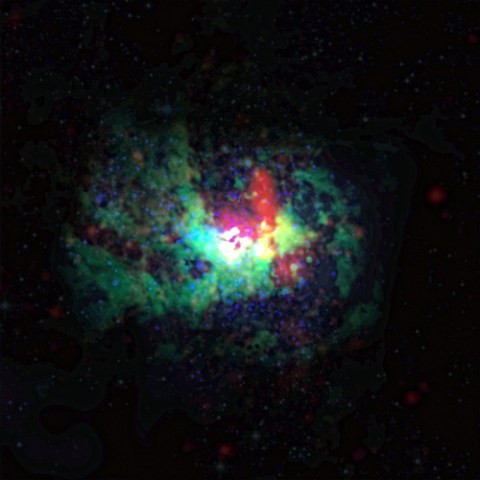 The International Federation of Competitive Eating is looking to space to help advance their sport. The organization responsible for Nathan’s Hot Dog Eating Contest recently wrote a letter to the W.M. Keck Observatory in Hawaii as part of their campaign to observe a black hole and learn from its insatiable appetite.

Contacting Keck Observatory was a natural progression for IFOCE, whose appetite for knowledge rivals even their hunger for hot dogs. The IFOCE website explains their scientific motivations for studying the phenomenon,  demonstrating that either “eaters” don’t know much about space, or competitive eating is far more mind-bending than previously imagined.

Black holes have been described as ‘voracious feeders’ consuming cosmic matter and energy like hungry adolescents, but it is important to remember that the mechanics of the black hole and the human esophagus are entirely different.

IFOCE is particularly interested in observing Sagittarius A*, a black hole in the center of the Milky way expected to devour a mysterious gas cloud later this month. The group hopes observing this phenomenon could “illustrate a more efficient way to consume viscous substances such as Jell-O, pudding, grits, and soups in competition.”

The Federation had initially planned to use their own research telescope somewhere with little ambient light, “such as Albany.” However, on February 26th Shea penned a heartfelt letter to Keck Observatory Director Taft Armandroff, asking that IFEC be allowed to use Keck’s telescopes to observe the Sagittarius A* event, in hopes of   “identify[ing] intake methods that can be employed by humans to increase eating efficiency on Earth.”

“We estimate that we will need no more than 90 minutes,” wrote Shea. “[B]ut it is likely that we will require some operational instruction as we have not previously worked with an infrared telescope.”

Although IFOCE offered Keck an “honorarium for [their] courtesy,” it seems the eaters will have to go elsewhere to feed their quest for knowledge. The Keck telescopes are fully booked until the end of July, and are typically reserved for NASA, the California Institute of Technology, and The University of California.

Even physicist Andrea Ghez, who discovered Sagittarius A* in 1998, didn’t understand the organization’s investment in the event. Says Ghez, “It’s the funniest request I’ve ever seen.”

Shea promises that in a sport outsiders often consider humorous, IFOCE’s request to use the observatory wasn’t a joke. In an e-mail to Huffington Post,the CEO expressed his frustration, saying “this has been our biggest struggle as an institution — gaining credibility.”

Shea says the Federation has previous scientific studies to its credit, citing their work on the Chicken Wing Consumption Model and the Belt of Fat Theory.

Hopefully Shea’s continuing campaign to  “elevate [IFOCE] to a new level within the scientific community” will teach critics how to do some competitive eating of their own– starting with their words.