Every Earthquake Has a Silver Gold Lining 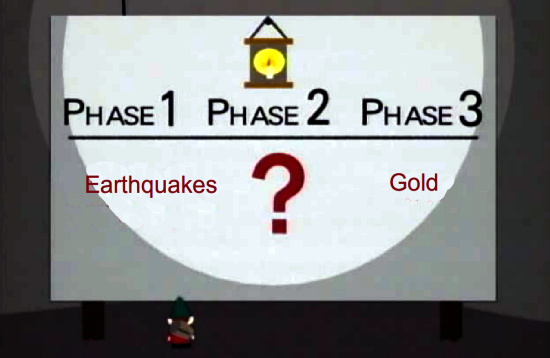 We all know that earthquakes are bad, m’kay? But if you’re willing to look past all the destruction they cause, they have a bright, shiny, golden bright side. New research shows that earthquakes can produce gold veins almost instantaneously. Admittedly, you’d have to be pretty greedy and callow to completely look beyond an earthquake’s destructive power and say “Hey, look! Gold!” We’re not here to judge you, so we’ll just explain how the process works.

Gold veins are formed when hot fluids in the cracks in the Earth’s crust deposit minerals, which scientists have known for a while now. A new study in Nature Geoscience says that the process actually happens very quickly. In fact, it is virtually instantaneous, taking as little as a few tenths of a second.

The process of gold vein formation occurs in “fault jogs” which are smaller jagged cracks that connect the main fault lines. During an earthquake, even incredibly small ones, the pressure in the cracks drops drastically. A magnitude-4 earthquake 11 kilometers beneath the surface would cause the pressure in these faults to drop to one one-thousandth of what they normally are.

That sudden and intense change in pressure causes the mineral-rich water below the Earth’s surface, which is normally at a temperature of about 390 degrees Celsius, to go through a process of flash vaporization, which leads to the flash deposition. This near-instant process effectively knocks out minerals or metals from the water. When gold is present, it creates veins, and it does so quickly.

It’s not long before more fluid rushes in to equalize the pressure in the fault jog, but the flash vaporization and deposition happen so quickly there is still plenty of time to take advantage of the pressure shift. Since a single fault system can have thousands of tiny earthquakes per year, there are plenty of opportunities for tiny veins to form, resulting in heavily marbled quartz deposits in active fault areas.