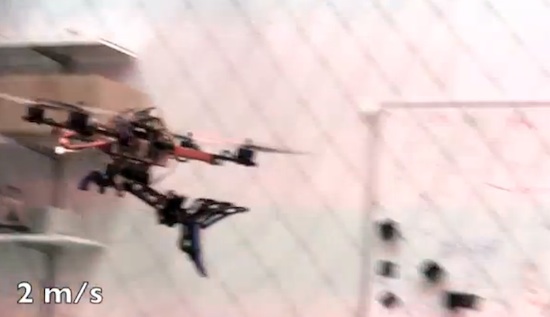 On hearing yesterday’s news that Carnegie Mellon University had developed a robot that turns into a tank, one of my fellow Geekosystem editors pointed out that at some point, we’re just asking for a violent robot uprising. He’s not wrong. I can’t imagine my co-worker is going to be exactly delighted, then, by the University of Pennsylvania’s newest robotic offering, a quadcopter drone equipped with a mechanical talon that allows it to snatch prey from the sky like a robotic eagle. While clearly terrifying, it’s also pretty awesome, and you can get a look at in action below.

University of Pennsylvania researchers 3D printed the three-clawed talon, which they designed by studying the claws of real eagles in flight to learn more about their hunting tactics. Like an actual eagle, the drone they’ve developed can swoop down and seize its target without slowing down much, thanks to a mechanism that allows its robot claw to swing back behind it as it returns skyward, allowing it to keep momentum.

So far the robot is only able to carry off stationary objects, but the way drone technology is moving forward, it won’t be long before this eagle is swooping down on and carrying off live salmon and tiny, terrified mechanical rabbits.