CHIMP Humanoid Rescue Robot Can Also Turn Into a Tank 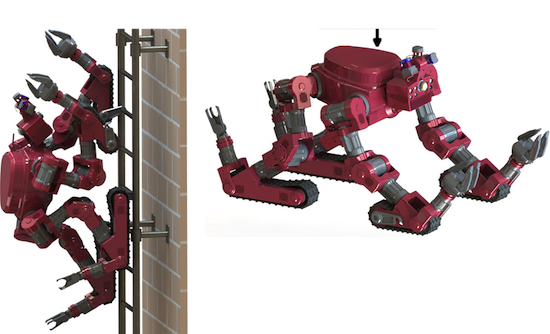 Researchers at Carnegie Mellon University have given robotic life to every child’s dream, building a rescue robot that can take on both humanoid and tank forms as the situation demands. The real life Transformer known as CHIMP (CMU Highly Intelligent Mobile Platform) can work like a human when it needs to climb a ladder or operate a valve. But when terrain gets rough, it can drop onto it’s four treads, entering a tank-like mode that makes it easier to maneuver and seek out survivors disaster survivors.

CHIMP is being developed by CMU for the DARPA Robotics Challenge, which is looking at candidates from universities and corporations around the country as it searches for the next generation of search and rescue robots. Started as a response to the Fukushima nuclear meltdown, for which existing robots were woefully unprepared, the Robotics Challenge looks to take disaster response robots to the next level, making them capable of doing anything a human can do in places to dangerous for a human to go.

Chief among the characteristics they’re looking for is the flexibility to adapt to a variety of situations, from shutting down malfunctioning computers to seeking out workers trapped under rubble. To get that flexibility, CMU is working to design a robot with multiple means of locomotion, recognizing that sometimes, “Four legs good, two legs bad!”

Of course, it’s not the only design going, and you can check out some of the other competitors over at the official DARPA site. In the meantime, we’ll be keeping an eye out for the next updates to CHIMP, which we hope will result in five of these robots joining together to become an enormous super-robot.

Well, Carnegie Mellon, what are you waiting for? Get on it!