Time to Dust off the Wii, Here Comes Zelda | The Mary Sue

Time to Dust off the Wii, Here Comes Zelda 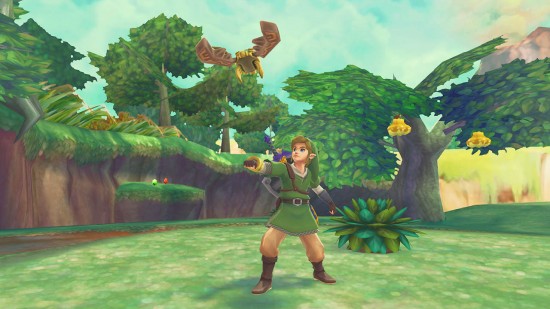 There is really nothing to argue about here. Even if you are the most devoted of Nintendo fans, someone that purchases every major release they come out with, you have to admit that 2011 has been a rather dry spell for an already mixed history of software releases on the Nintendo Wii. The impending release of The Legend of Zelda: Skyward Sword might be hailed by some as a reason to pardon Nintendo’s lack of titles but, it doesn’t change facts.

A post from September on Metacritic lists the 25 best Wii games of 2011 up until that point. Most telling is that the very top entry on the list, Xenoblade Chronicles, has little chance of seeing a North American release date. Nintendo has said again and again that they have no current plans on bringing the title to this region. This is just marketing not wanting to rule out the possibility, while also not confirming much. If anything, the response has been ambiguous, leaning towards “no” in all cases.

And it’s not like there hasn’t been a significant show of interest in titles that Nintendo of America has no current plans on localizing. Both Pandora’s Tower and The Last Story have seen a push by Operation Rainfall in addition to Xenoblade Chronicles. They seem to just outright refuse to endorse any potential for the games to show up on the North American shores. This boggles the mind given how popular the titles were in Japan. Not to mention that they’ll be receiving localization for Europe.

To once and for all solidify just how barren it has been this year, at the bottom of Metacritic’s list falls both the Captain America and Thor licensed games. This bewildering happenstance should speak for itself. Even if you add both Zeldas and the recent Kirby game above everything else already on there, you still end up with Captain America being one of the 25 best games of 2011 for the Wii.

It’s worth mentioning that it had a Metacritic average of 57 at the time.

So, even if The Legend of Zelda: Skyward Sword wins over millions of adoring fans, it is still a single stellar pearl among an ocean of discarded trash. It could be the best in the franchise and it still wouldn’t make the rest of the year excusable. There’s a reason I don’t own a Nintendo Wii; based on the amount of games released versus expense and space it would take up on my table, it’s not worth it in the long run.

Plus, since I’ve managed to hold out this long, there’s no reason I can’t wait until the Wii U comes out at some point in the near future. In the articles linked above, some information even points to those three games that Operation Rainfall so desperately wants to be localized as being made as precursors to bigger and better things for Nintendo’s latest console.

Which, in a way, almost excuses their behavior. If there’s something to be learned from the Sega Saturn debacle, it’s that competing with your own hardware and software for mind share and market share is a losing battle. There’s no reason to set your company up for failure like that when it is just as easily solved by focusing on one major console at a time rather than releasing and developing for two consoles that seem shockingly similar in effect.

Ultimately, it’s time to dust off the Wii. Because you’ve surely had little reason to do so over the past year. Some might even argue that you’ve had little reason to do so over the life cycle of the console at all. Barring a handful of games, there’s been no serious support of the Nintendo Wii. That’s not to say there haven’t been a few stellar titles that proved the concept, but merely that Nintendo’s infamous lack of third-party support still hasn’t been sufficiently addressed. If we truly are moving on to a new generation of hardware, maybe now is the time to finally shake that association permanently.