“Dumb Starbucks” Is the Most Aptly Named Coffee Shop Ever

At least they're honest. 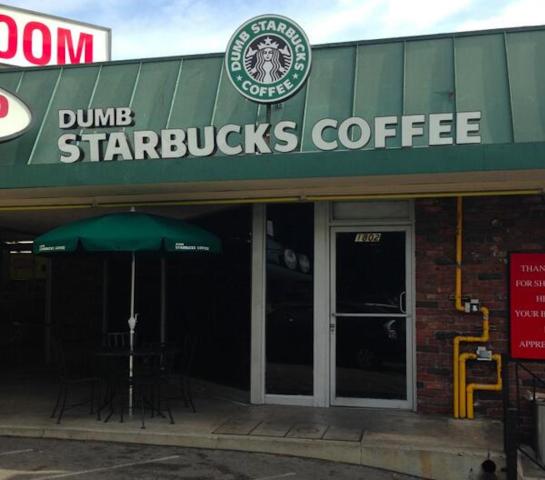 Strange things were afoot in L.A. this weekend as a “Dumb Starbucks” opened in the city’s Los Feliz neighborhood. No, I don’t have anything against Starbucks; this coffee shop is actually just called Dumb Starbucks Coffee. It’s not clear if the shop is a work of parody or a real coffee shop’s marketing ploy, but neither will probably sit well with Starbucks.

According to sources and an explosion of images on social media, the Dumb Starbucks is a surreal experience that looks exactly like a real Starbucks right down to the logo and the in-store merchandise—except, of course, for the fact that everything has “dumb” written in front of it. You can get a “dumb latte” or a “dumb iced coffee” to start your day, and why not listen to some “dumb jazz standards” while you’re at it?

Adding to speculation that the store is set up for some kind of dumb parody stunt, the dumb famous people like Rainn Wilson and Dan Harmon got shots of the place without its gigantic line, which reportedly took up to two hours just to get a dumb coffee. Aside from the novelty, the dumb line is likely so long because they’re giving away the coffee for free.

The baristas on duty said that the free coffee is to promote the new business, but it’s much more likely that it’s all just a joke, and whoever’s behind it doesn’t want to give Starbucks a monetary reason to pursue any action beyond just getting it shut down.

The fact sheet inside the Dumb Starbucks claims that it’s a fair use of the Starbucks logo and design under the protection of parody, but that dumb excuse probably won’t fly if Starbucks decides to come down on them. A spokesperson for Starbucks told CBS that the company is aware of the store and “looking into it,” so you might want to get some Dumb Starbucks now before Not Dumb Starbucks shuts it down.

When you’re a hugely successful company, you don’t exactly want to have to clarify to people, “No, not the dumb one. The other one.”