OREO Sent Us Their New Cookie Flavors, but No Milk

Yes, this is a picture of empty boxes. No, YOU ate all the cookies. 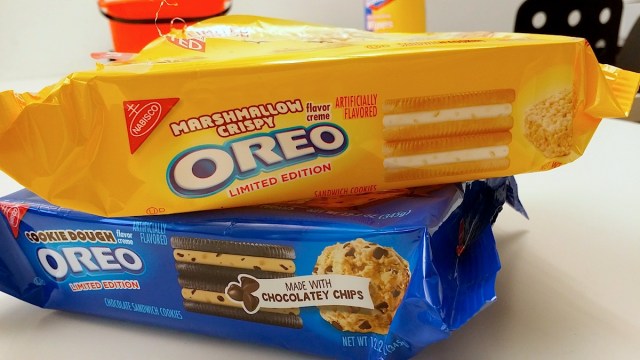 OREO is expanding their flavors with two new faces: “Marshmallow Crispy” and “Cookie Dough.” The cookies hit shelves in February, but we got some sample boxes (that are gone now) from OREO, and you can too! We’ll tell you how, because we know everyone digs cookies.

If you want to get an early taste of the new OREO cookies, watch the Grammys* this Sunday and wait for the OREO commercial. It will have a special hashtag, and if you tweet it you could win some free cookies.

*We think it’s the Grammys. OREO couldn’t say explicitly because of copyright reasons, most likely, but the card they sent us with the cookies reads as follows:

Tell your friends, family and followers to tune-in this Sunday to the hottest music show of the year to see the new OREO TV spot for a special surprise.

At the end of the commercial, OREO will reveal a one-time-only, top-secret hashtag that will unlock the first batch of its limited-edition flavors. Fans with the fastest thumbs who tweet the hashtag will get a free taste of Cookie Dough or Marshmallow Crispy OREO cookies.

So they probably mean the Grammys, right? As for the cookies themselves, we liked them, as evidenced by the fact that we ate two boxes of cookies in a shamefully brief amount of time. Of course, since we’re not monsters, we shared with some of our office mates. Self-described “OREO Connoisseur” Sam Mee gave us her thoughts on the Cookie Dough flavor:

And we asked The Jane Dough‘s Colette McIntyre to try the Marshmallow Crispy variety:

As for Team Geekoystem proper, we had varying opinions on the new flavors. For my part, I thought the Cookie Dough flavor tasted more like coffee than cookie dough, which is not a complaint. I’d love a coffee OREO. Of the two I much preferred the Marshmallow Creme, due in part to the crisp rice embedded in the creme.

They were good, but I didn’t think either of them tasted like what they were supposed to. The  Marshmallow Crispy one just tasted like a really sweet OREO and the Cookie Dough one tasted like a butterscotch latte or something.

I second Dan. I really liked the cookie dough but definitely thought it tasted more like coffee, which I didn’t mind but for false advertising. Also the lemon was delicious but nothing new.

Victoria McNally, who would like me to include the word “mouthfeel” in here somewhere (there you go) agreed on the Girl Scout-similar texture of the Marshmallow Crispy, and also enjoyed the inclusion of the crisp rice. She had this to say about the Cookie Dough flavor:

This might be my own bias concerning the way that I personally make cookie dough, but I was expecting the bits of chocolate chip in the cookie dough icing to be hard, sort of the way that actual room-temperature unbaked chocolate chips are. I was very surprised when they turned out to be the same consistency as the rest of the icing. I had really enjoyed the crunchy krispies in the marshmallow icing of the other cookie, so not having a similar blend of textures in this one was disappointing.

This sparked a very long discussion about the consistency of chocolate chips at varying temperatures. It is the official opinion of Geekosystem that the chocolate chips are likely being softened by their prolonged suspension in the cookie-dough-flavored creme, and that further research should be done to get them to maintain structural integrity at room temperature. Our working hypothesis is that dunking in cold milk would affect the consistency, but our opinions differ wildly as to the extent of this change.

Basically what we’re saying, OREO, is that we need more cookies.

(via OREO, image our own)