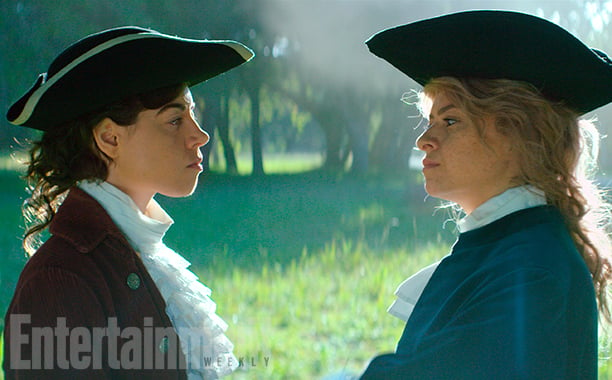 As soon as Drunk History announced that Lin-Manuel Miranda would be appearing on an episode about Alexander Hamilton, I assumed that the cast would be as diverse as the cast of his musical. But I have to admit, I didn’t predict that the casting would involve any gender-bending, and I definitely didn’t expect that two of my favorite comic actresses ever would end up in the lead roles.

Given that one of the primary themes of the musical Hamilton revolves around the line: “Immigrants! They get the job done,” it seems fitting that notable immigrant Alexander Hamilton will be played by Shawkat, whose father is an Arab Iraqi from Baghdad. Meanwhile, Plaza’s dad is Puerto Rican. So not only have the roles been gender-swapped, the episode will also be sticking with its progressive themes with regard to racially diverse casting as well. Given the deplorable attitudes we’ve seen come to the fore lately towards towards Arab immigrants, as well as our country’s continued refusal to acknowledge the historic contributions of people of color, Hamilton‘s social commentary on immigration and on diversity has been a huge part of what’s made it such an American treasure.

It’s also cool because, although Drunk History has covered Alexander Hamilton in the past, that previous episode starred a bunch of white guys—which is historically accurate, sure, but since we’re revisiting the story again anyway, why not change it up a bit? That’s the ethos behind Hamilton, after all.

What’s more, after the sadly incorrect news earlier this year that Hamilton would be considering women to play the roles of Washington and Burr, and the subsequent disappointment that Hamilton wouldn’t be doing a gender-swapped cast after all, this feels like a sign that Lin-Manuel Miranda saw fans’ disappointment and wanted to tip his proverbial hat towards that. (Speaking of the fandom, Shawkat told EW she was already a Hamilton fan herself before she even got tapped for the role on Drunk History.)

That said, this won’t be the first time that women have taken on these roles. I’d be remiss if I didn’t remind you all of this performance at MCC Theater’s “Miscast Gala,” at which actors get to take on roles they’d never ordinarily get to play. Ana Villafañe, who stars as Gloria Estefan in Broadway’s On Your Feet, played the role of Aaron Burr—setting the bar for fellow Latina Aubrey Plaza to take on the role now. Plus, The Mary Sue’s own Teresa Jusino played Alexander Hamilton in one of the songs in this fan-run Hamilton karaoke event. So, there’s clearly a precedent for ladies playing these parts!

Just in case you weren’t already excited enough about this, Lin-Manuel Miranda shared some more details about the experience on his Twitter today:

1) I realize the @drunkhistory announcement happened when I was on vacation, so I’ll tell you some things about that!

2) We filmed my segment @drunkhistory on Superbowl Sunday. I did not see the Superbowl this year.

4) I woke up and a LOT of people I know (Groff, @questlove, @ChrisisSingin) texted,”Do you remember FACETIMING me last night?”
I did not.

5) So I’m just as curious as you are as to what I said. And the casting is AMAZING. I guess we’ll see this fall. @drunkhistory.

6) I think that’s it. My drunken historical ramblings will be your entertainment at last. Love you. Bye.

THIS IS MUST-SEE TV, FOLKS!

(via Vulture, image via EW)