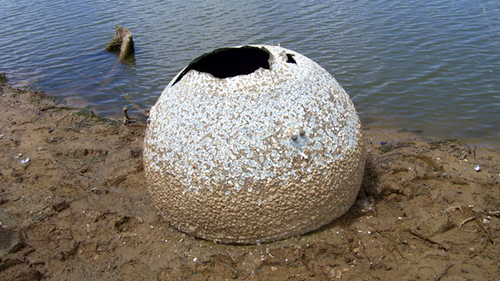 On February 1, 2003, people around the world watching the Space Shuttle Columbia return to earth were horrified as the shuttle broke-up on re-entry. All seven astronauts onboard were killed, and the remains of the shuttle left a trail of debris from North Texas to Louisiana. NASA immediately set about the daunting task of recovering the pieces of the Space Shuttle, and have continued to do so as pieces are unearthed.

The recent drought in Texas has caused water levels to drop across the state, which has revealed a piece of American history resting on the bottom of lake. In the East Texas city of Nacogdoches, NASA has confirmed that a part of Columbia has been discovered. The piece of debris is a power reactant storage and distribution system (PRSD), which looks like a badly battered disco ball.

According to Lisa Malone, a NASA spokeswoman the PRSD is four feet in diameter, and was used on the Space Shuttle as a tank to provide power and water during missions. NASA is looking into how to recover the object. Malone told CNN:

“It’s one of ours. We’re looking into whether we’ll send a team out or local authorities can.”

Authorities in the city of Nacogdoches are reporting that the piece of debris was found after intense drought caused the water level in Lake Nacogdoches to recede. In 2003, right after the Columbia disaster, other debris from the Space Shuttle was found in the area.

Local authorities are reminding people that all debris is government property. Many people in 2003 recovered pieces of the broken shuttle, in some cases even from their own backyards. But, taking these items is illegal. Sgt. Greg Sowell of the Nacogdoches Police Department offered this warning:

“We want to remind everyone that the rules are the same as they were back in 2003. If this object is indeed a part of the shuttle, it is government property, and it is a criminal offense to tamper with it.”

The break-up of Columbia was one of only two space shuttle disasters in NASA history to kill all the astronauts onboard. The other was Challenger in 1986. NASA recently ended the Space Shuttle Program with the last flight of the Space Shuttle Atlantis on July 21st, and will now focus on exploring other areas of space.

(via CNN, photo via chron.com)