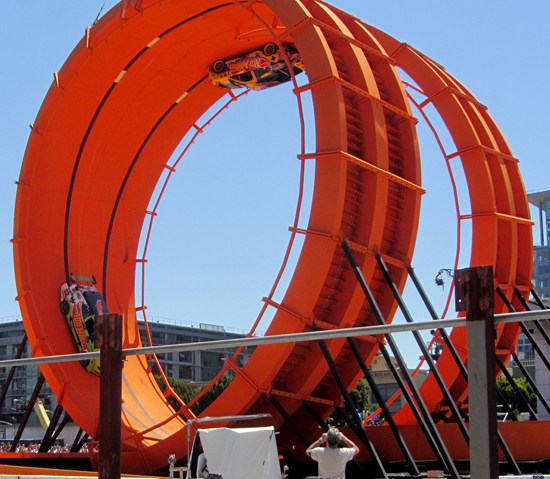 In an absolutely appropriate use of funds, the good folks of X Games had a track labeled the Hot Wheels Double Dare Loop constructed. A completely real, 66-foot tall version of the popular Hot Wheels Double Dare Snare toy. They then decided to have two men, a rally car driver and a Hollywood stuntman, hurtle through the course in Hot Wheels-branded cars. We sent two guys through a giant version of a toy loop with real cars. And it was awesome.

Tanner Foust, the rally car driver, and Greg Tracy, the stuntman, now hold the world record for largest loop completed in a car. The previous record was held by Chinese driver Li Yatao with a mere 42 feet. To put it all in perspective, the two driver effectively made a loop the size of a six-story building.

In order to complete the loop, they hit 52 miles per hour and experienced the seven times the normal force of gravity. That’s the kind of force usually reserved for talk of fighter pilots when they’re making high-speed turns and maneuvers. Folks have been known to black out at around four time the normal force of gravity. Check out the video below to see for yourself:

Personally, I look forward to many more Hot Wheels-inspired feats. This could the start of a very dangerous trend.

(via ESPN, image credit via waltarrrrr)