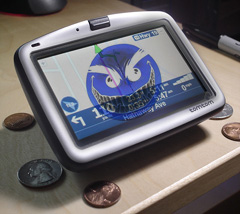 GPSes are wonderful things — In New York City, they’re essential for navigating the labyrinthine hell known only as “West 4th Street,” but their convenience is diminished by their unfortunate tendency to attempt to lead us to our dooms.

A group of tourists in Australia needed to be rescued by police after they too-literally followed a GPS’ directions, even when it told them to bypass danger signs, move rocks obstructing the road, and drive into a nearly inaccessible gully in the woods.

South Korean tourists travelling from Brisbane to Rockhampton had to be rescued from a remote track in a forestry reserve in southeast Queensland after they tried to follow the directions given by their car’s GPS system.

The three followed gravel roads, then dirt roads, then went through a couple of gates, and ended up bogged in a gully in Cordalba State Forest, near Childers.

The men, who did not speak English, ignored danger signs and moved rocks blocking a road, to get to an isolated point that was practically inaccessible, the Bundaberg NewsMail reports.

Though in this instance, the GPS mayhem was relatively minor and didn’t result in bodily harm, inaccurate GPSes can be dangerous for travelers who follow them too faithfully in dangerous or isolated areas: A month ago, backpackers following a GPS got lost in the same woods as the South Korean tourists, and last year, a couple nearly froze to death in eastern Oregon after a faulty GPS led them to a forest service road, where they were trapped in snow for nearly three days.