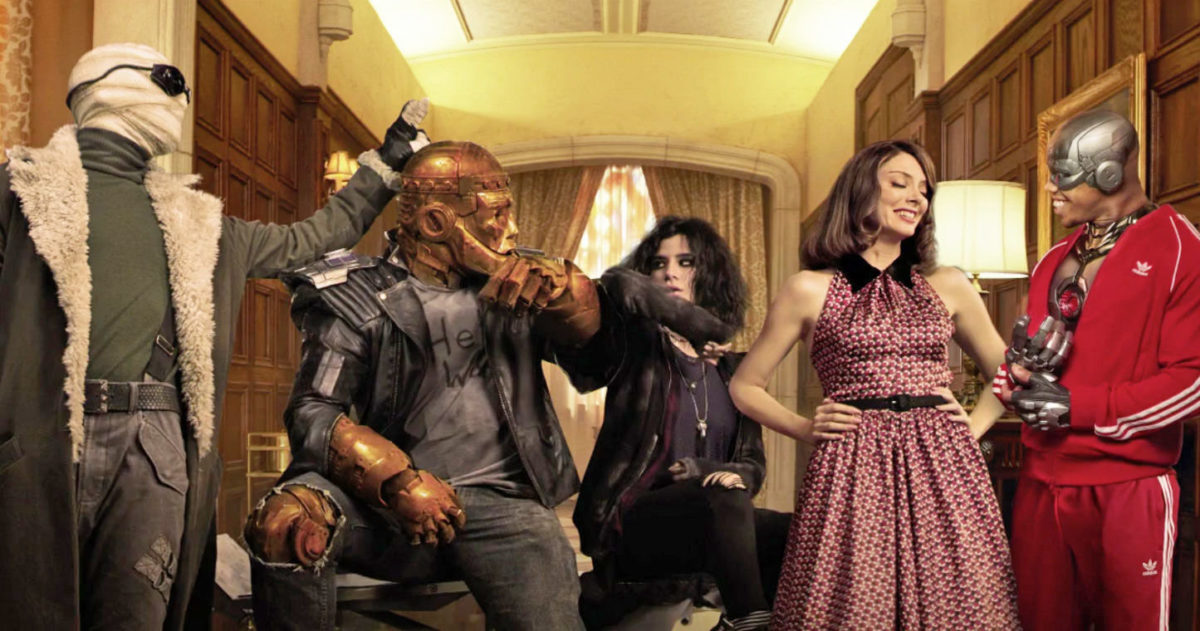 Listen. I know how you’re feeling. I’m feeling it too. You can’t put down Twitter or Facebook or Instatok or whatever you kids are using nowadays. You’re endlessly refreshing 538 (let me save you the trouble, it hasn’t changed since the last time you checked it five minutes ago). You’re glued to the internet and social media right now because consuming information gives you the illusion that you can control that information.

But … you can’t. As much as it feels that way, endlessly scrolling Twitter will not make the election results come faster or change them. All it will do is give you more anxiety or bring up old trauma and fear. We call it doom scrolling, and it’s a trap I fall into all the time. But if we can actively choose to do something else, we can actually be a bit less anxious. Instead of losing yourself to the doom scroll, I personally recommend that you instead choose the Doom Patrol.

Now, there’s a real reason I’m recommending this show in particular, and it’s not just the pun or the fact that the 24 episodes could keep you occupied until well into election night (if you pause to sleep and eat, which we here at The Mary Sue strenuously recommend). I want you to watch Doom Patrol instead of doom scrolling because it’s a show about trauma, recovery, resilience, and hope.

Doom Patrol is one of many truly great superhero series. It’s as weird and wild as The Boys or Watchmen and equally excellent. On its face, Doom Patrol is about another band of screw-up superheroes. Yeah, that’s the basic premise: five characters who can’t seem to die, end up fighting the weirdest threats to the world, and taking on big bads who are incredibly above their paygrades. But it’s really about people who have been hurt in the past learning to live and heal.

That sounds fluffy, but it’s not. Doom Patrol is messy and painful and weird and sad, because life is messy and painful and weird and sad. Each character on Doom Patrol has been through massive traumas, and even though they’ve got superpowers, their pain is relatable. Alcoholism, homophobia, racism, sexual abuse and exploitation, classism, and more have defined these five people’s lives until they just … shut down. Their immortality was just them hiding from their pain but they couldn’t hide from their found family, and bit by bit, they’ve tried to get better.

And right now? We can relate. No matter what happens tomorrow or in the rest of the week, we have been through it for the last four years. We’re exhausted and hurt and scared and deeply traumatized. We all would like to lock ourselves in a creepy mansion and not read the news for 50 years. It’s so bad for a lot of us that we can barely conceive of a world or life where things are better. And even if the good guys win … well, that doesn’t erase the hurt of the past and it certainly doesn’t mean there aren’t more battles in the future.

But Doom Patrol isn’t really about those external battles against the bad guys. It’s about the fight inside.

It’s about Larry and letting go of the fear that kept you in the closet. It’s about the Chief and Dorothy; confronting that as a parent you have to let a child grow up and leave you and about how growing up itself and facing a shitty adult world is terrifying. It’s about Rita and how we have to understand how our parents screw up and how we have to value ourselves.

It’s about Jane, the ways we have to own how much our trauma messed us up, and even how we screwed up, in order to have a chance at putting ourselves back together. It’s about Vic and searching for justice in an entirely unjust world that used you and lied to you. It’s about Cliff and knowing that we’ve been the victim of fate but also made a lot of our own mistakes—but we can try, just try, to do it right this time.

So yeah, if you’re feeling completely crushed by the world, watch Doom Patrol. Watch a show that reminds you you’re not alone in your pain and fear and that connecting to others, doing some good, and working through your baggage can make things better. No, it might not defeat the bad guy (you’ll need a giant rat to make out with a giant talking roach or a fistfight with Jesus for that) but it might help your little corner of the world suck a bit less, and that’s a heck of a lot better than refreshing Twitter for the 100th time.

Seasons one and two of Doom Patrol are available on HBO Max. Season three will arrive in 2021.