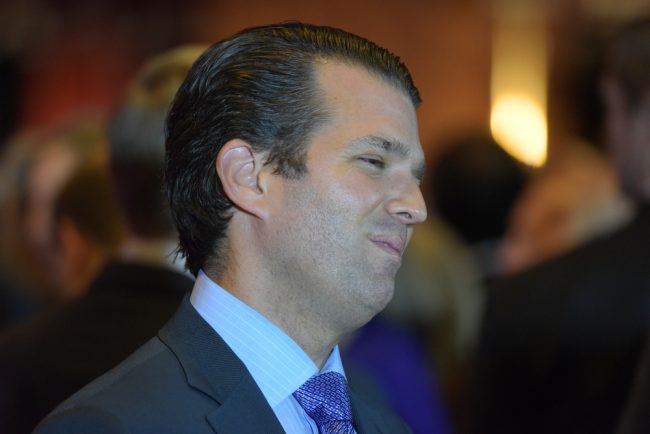 Following the outing of Harvey Weinstein’s decades of sexual harassment and assault, Donald Trump Jr. wants us all to know that he cares more than anyone, the absolute most, and he’s gonna rub his caring in all those smug Hollywood elitist liberal faces.

He’s been digging up old tweets to show that when it comes to caring, he won. And everyone else lost.

Actually Harvey Weinstein is one of the best people to work with in this town. #funfactneverreported

And since he won, that means anyone who’s ever associated with Harvey Weinstein has now lost. And apparently his prize is that they all have to stop criticizing Donald Trump?

Out of curiosity where is @realdonaldtrump from??? Seems like there could be more to that pass than this nonsense. https://t.co/N01MLZA0Wa

Seriously what is the reasoning here? Talk show hosts are mean to Donald Trump –> Hollywood man is revealed to be a monster –> Hollywood lost the moral high ground and therefore has to stop talking about Trump? Is that it?

You mean that big story from the failing, liberal, one-sided @nytimes? I think it is disgusting.

Great I look forward to your monologues next week. You're probably due for a change if only for a moment or two. https://t.co/hoEbRApHeT

great – in the meantime, enjoy this! https://t.co/kQsBAioFwh

Also, Democrats now have to give back every cent they got from Weinstein. I’m sure that has nothing to do with damaging the opposition, it’s about ethics.

There are some valid points mixed up in all of this concern-trolling that absolutely should be talked about. We need to call out those who remain quiet for fear of alienating powerful abusers. We need to talk about what allows the Harvey Weinsteins of the world to flourish–both those complicit in keeping an “open secret” as well as recognizing the tactics serial abusers use to keep their behavior hidden (from, say the Meryl Streeps and Hillary Clintons). Most powerful abusers are very good at remaining publicly respectable, which leads to a disbelief of accusers.

If he cared about women, he might think about what it actually means to be asking Saturday Night Live to do sketches about sexual assault.

If he cared about women, maybe he wouldn’t have supported the discrediting and shaming of the victims of … other accused abusers.

Picture of Hillary Clinton shaking hands with a known sexual harasser.
This is bad for Democrats. pic.twitter.com/PkI1H8ZCAg

Hard to think of any difference between Weinstein & Trump other than one of them was his PARTY's NOMINEE FOR PRESIDENT OF THE UNITED STATES.

But Donald Trump Jr. doesn’t care about women. He only cares about himself.