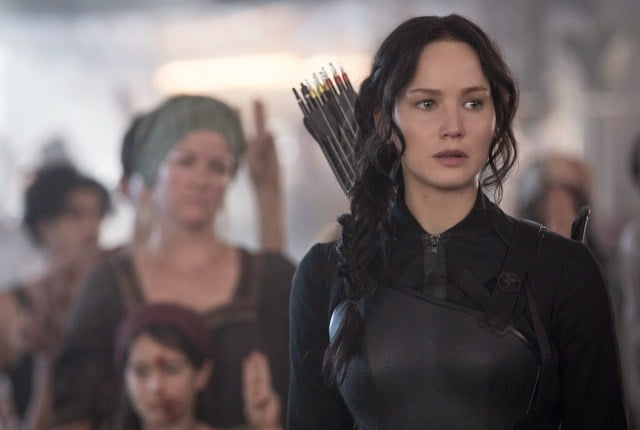 The Hunger Games: Mockingjay Part 1 is rolling out in theaters as we speak and the cast and crew are doing countless interviews in support of it. Here’s one of the weird ones.

Look, I don’t know Jennifer Lawrence (though sometimes I daydream she’s my BFF) but from what we’ve seen of her in the media, she seems like a pretty average young woman.  So you can imagine how my head tilted at something Donald Sutherland said to E! Online while promoting their film:

“When I worked with her, I realized the child was a genius,” Donald Sutherland, who plays President Snow in the Hunger Games movies, told me last night at the premiere of The Hunger Games: Mockingjay, Part 1 (in theaters on Nov. 21). “She’s the right person at the right time in the sense of Joan of Arc or Jesus Christ, any genius, in that sense.”

Here what my first reaction:

but here’s how I think Lawrence herself would react:

Although Sutherland went on to add:

“She has the ability as an actor to tell the truth out of the material and that truth is immediately recognizable with everybody because it hits you in your heart, your solar plexus and your mind,” the legendary actor continued. “And she has the genius of person to be not affected by all of this. She’s just a real girl.”

Which is totally how I’d describe her. You know, if anyone ever bothered to ask me. I probably wouldn’t have thought to use the phrase “solar plexus” though. I definitely need to work that into my every day vocabulary somehow.