Donald Glover Has Made It Into The Amazing Spider-Man — Secretly, Like a Ninja 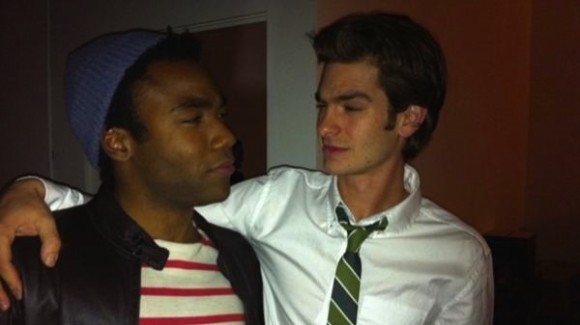 Some of you may recall that there was a half-serious internet campaign a while back supporting the casting of Donald Glover (Community) as Peter Parker/Spider-Man in the upcoming reboot The Amazing Spider-Man. That obviously didn’t come to pass, and Andrew Garfield got the role instead. (Though Glover and Garfield “talked it out” in the end.) But now, Glover has revealed that the spirit of that campaign lives on and will actually materialize in some shape or form in The Amazing Spider-Man. Yes, you heard that right — Donald Glover, or at least something related to him, will make it into Spidey.

In an interview with MTV, Glover let us all in on something that happened in what can probably be considered a pretty awesome consolation prize for not getting a Spidey audition. Marc Webb, the movie’s director, contacted Glover to ask him for permission to use his image in the movie. Since Glover had to “sign some stuff,” he was mostly mum on the subject. But he did say that there will be something hidden in the set design of Peter’s bedroom that will be a shoutout to Glover. One possibility: Maybe Peter is a fan of Community or 30 Rock, for which Glover was a writer and has some DVDs on his shelf.

“He has all the 30 Rock DVDs, and he has my name circled on all of them. It’s like a Cape Fear thing where he’s doing pushups and stuff and it’s kind of like he’s out for me.”

Also possible Glover-related entertainment: a Childish Gambino poster, a DVD or poster of Mystery Team, or maybe Peter got his hands on a rare, nonexistent (in real life) Derrick Comedy DVD. (I’d say Inspector Spacetime, but that’s not Glover-created.) Whatever it is, it will be there, but Glover isn’t allowed to say. But the fact that it’s there is something that Spidey fans in the indie comedy world will probably just die over for a week. And that’s something to look forward to.

It also says something about the original campaign, doesn’t it? Not only did it result in an actual reference in the movie, but as we know, it inspired Brian Michael Bendis to create Miles Morales as Spidey’s alter ego in Ultimate Spider-Man. See? Donald Glover can change the world, you guys.

Here is the full segment from MTV:

Previously in The Amazing Spider-Man