Donald Trump Jr. Made a Gross Joke About #MeToo at His Daddy’s Rally 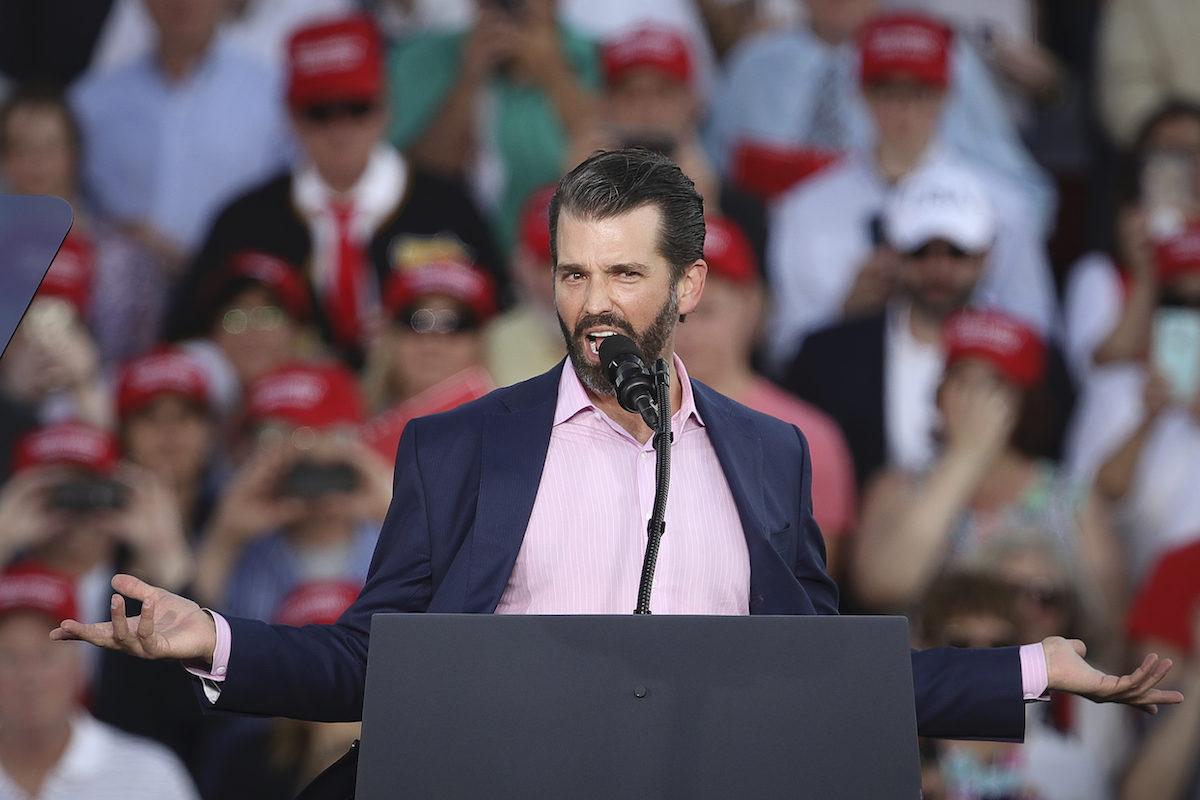 Generally, I try to pay as little attention as possible to Donald Trump, Jr., and that’s usually fine because while he is a massive nepotistic tool, unlike his sister, he has zero influence over governmental policy. He’s just a wannabe Patrick Bateman and hanger-on–reaping the benefits of his family’s lifelong dedication to corruption but also stupid and tactless enough to occasionally implicate his father in larger crimes. But every once in a while, he says something so idiotic and insulting that I feel forced to comment on it. And this is one of those times.

At a rally in North Carolina this week, Don Jr. was tasked with warming up the crowd, as he often is. He was introduced by his girlfriend and former Fox News personality Kimberly Guilfoyle. As he took the stage, they briefly kissed and after he spent a minute awkwardly tossing out MAGA hats, he called after her, “Do you think the media’s going to sue me for harassment since I just gave you a little kiss?”

There was some tepid laughter as he continued, “Notice, there’s no objection, okay? It’s on the record. I will not be getting #MeToo’d this evening. Kimberly may #MeToo me later but that’s a different story. Could be worse.”

JFC, where to start with this idiocy? Maybe with the total willful misunderstanding of what constitutes sexual assault? Because a consensual kiss between two people in a romantic relationship ain’t it. And everyone knows that, but Trump–like his father before him–also knows that making belittling jokes that imply sexual misconduct is made up or overblown is a useful tool in convincing their base that the #MeToo movement and those who support it cannot be trusted to know the difference. Of course, Don Jr. doesn’t have anything resembling a sense of humor, so his attempts at these sorts of jokes (which he has tried before) don’t even end up making any kind of sense.

How little sense does this joke make? Well, for one thing, the “media” doesn’t sue people for sexual harassment or assault.

Second, when he says Kimberly might “Me Too” him later, is that a sexual innuendo meaning later that night or is he implying that his girlfriend might fabricate allegations against him sometime in the future, presumably after they break up? Because one is a reductive conflation of sexual assault with consensual sexual activity, while the other is a really horrible and insulting thing to say about your girlfriend and if I were her, I would be pissed. (Of course, if I were her … well, a lot of things would be different.)

According to the Washington Post, “Pollsters and political strategists believe [Trump’s joke was] a big mistake.” I’m not a professional pollster, obviously, but I have trouble believing that. Trump voters–a disturbing percentage of (white) women included–have made it pretty clear that they don’t give enough of a crap about comments like these to let them influence their voting plans, even when they come from Trump Sr. himself, let alone his degenerate son. Credible accusations of sexual assault have been made against Donald Trump as recently as June of this year and we don’t hear that being talked about as something his base or even undecided swing voters care about at all.

Women in general might think a joke like Trump Jr.’s is a big mistake on a humanity level, but as a political strategy, Trump and mocking the very idea of sexual assault are pretty inseparable. It’s like half of his entire brand.

(via Washington Post, image: Drew Angerer/Getty Images)
Want more stories like this? Become a subscriber and support the site!