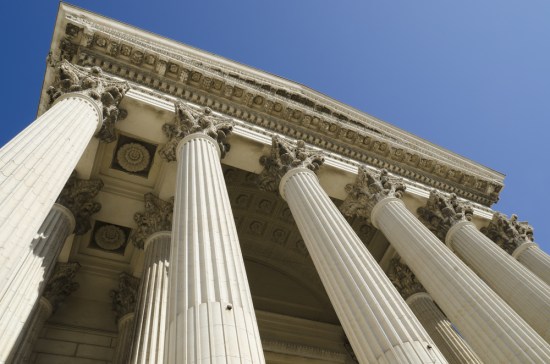 A Department of Justice spokeswoman has revealed that several unauthorized users gained access to a server that hosts the Bureau of Justice Statistics’ website. You can probably guess who’s taking responsibility: Your friendly neighborhood collection of loosely-associated self-proclaimed hacktivists, Anonymous. Anonymous claims that among the spoils of the hack, there are internal emails and a full database dump which may contain data the Bureau has been collecting about cybersecurity incidents.

The 1.7 gb of data yielded from the hack were disseminated by torrent, but due to complications, are currently inaccessible. According to the Anonymous affiliate allegedly responsible for illicit dump, progress on all downloads is being hampered by yet another hacker, who is attacking the computers seeding the stolen data. Yeah, it’s crazy out there.

While we wait with bated breath for the torrent issue to be fixed so we can find out what is in the collection of pilfered data, the Department of Justice is looking into its options for finding and presumably prosecuting any Anonymous affiliates who can be hunted down. For the moment, the DoJ is looking into whether or not the hackers actually violated any computer use laws, but confirming that they did would only be the first step in a long process.

This isn’t the first time that Anonymous has hit cybersecurity data where it lives; back in February, Anonymous published an FBI conference call in which the problem of Anonymous was discussed. If previous Anonymous hacks are anything to go by, the data from this little sortie is unlikely to contain anything Earth-shattering and will, instead, be mostly a source of embarrassment. Still, Anonymous ought to be careful who they are poking with sticks considering that bills like CISPA, and cybersecurity fears in general, tend to stem from these sort of antics, and the government’s attempts to put a stop to this kind of behavior, while unlikely to be successful, are likely cause a lot of collateral damage. Then again, it’s not really in character for Anonymous to “play it safe.”