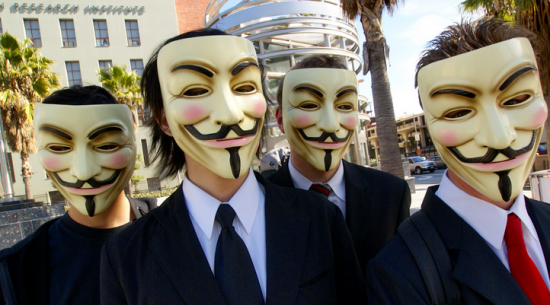 During this recent spell of Internet-endangering-legislation craziness, everyone’s favorite loosely organized group of Guy Fawkes-mask-wearing hackers, Anonymous, has been relatively quiet aside from some (alleged) empty threats thrown Sony’s way and a flurry of DDOS attacks following the MegaUpload takedown. Now, Anonymous has kicked it up a notch and leaked the spoils of one of their more impressive hacks to date: Audio of a conference call between the FBI and the Scotland Yard.

As with anything Anonymous, your first instinct should be to question authenticity, whether it be the authenticity of a threat, a leak, or in this case a 16 minute audio file. This is real, however, as the FBI has confirmed that the call was “was intended for law enforcement officers only and was illegally obtained,” as well as the fact that “[a] criminal investigation is under way to identify and hold accountable those responsible.”

It’s unknown exactly how Anonymous managed to get their hands on this audio, something which they’ve naturally been gloating about on Twitter. Anonymous has released email lists and other dumps of network credentials in the past, but their meat-and-potatoes is generally DDOS attacks, so the interception of this law enforcement communication is a pretty big catch for the hackers, and a pretty big embarrassment for the agencies involved.

The conversation pertains to trying to track down members of Anonymous, so the irony that Anonymous was listening in — and may have been listening in for for weeks now — is something unlikely to be lost on the FBI and Scotland Yard alike. More than any other Anonymous activity before, this seems to be a direct slap in the face to law enforcement. It’s worth noting, however, that whoever leaked the audio bleeped out some of the hacker’s names ostensibly to protect their identities, which suggests that the agents in the recording are, in fact, barking up the right tree. Still, that’s a small victory to be had when one of your private conversations has been published and the security of all your discussions has been thrown into question. It’ll be interesting to see if this is a harbinger of increased, intensified Anonymous action in the days to come.

Listen to the conference call here, while it lasts.