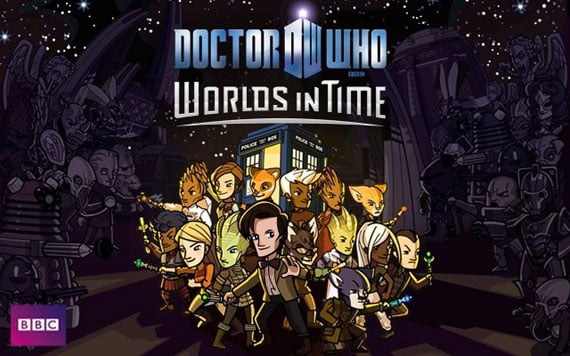 The browser-based video game Doctor Who: Worlds in Time, not to be confused with the upcoming Doctor Who: The Eternity Clock for the Playstation, has been opened up to players to try for free. Hit the jump for details!

According to the official game site, “Doctor Who: Worlds in Time is a browser-based online game set in the universe of Doctor Who. Players are time travellers helping the Doctor solve a mystery that threatens the very fabric of the time stream. At launch, the game will include monsters from both the original and new series of the show, as well as host worlds (and other locations!) familiar to fans.”

Fans are able to choose from four different races to make a customizable character for themselves. And according to Digital Spy, “The Doctor will then send players on missions to a number of locations, including Skaro, Messaline, The Library and New New York, and will feature appearances by the Daleks, Cybermen and the Weeping Angels.”

Three Rings Design CEO Daniel James said, “We’ve worked to provide Doctor Who fans an experience that matches the quality and imagination of the TV show, and a forum to introduce casual gamers to this remarkable world with an experience accessible to players of all levels.”

I don’t know about you but I think this looks super cute and I’ll certainly be passing the time with it while waiting for The Eternity Clock. Give the preview a try now!