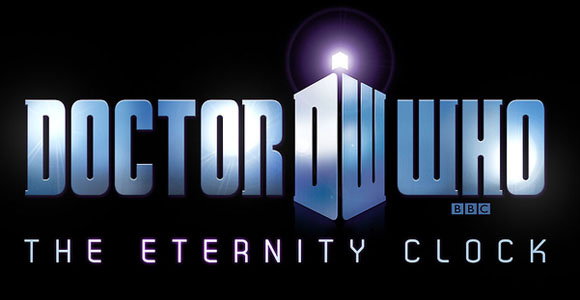 Fantastic news, Whovians! The BBC has just announced a new Doctor Who video game and it’s going to feature the adventures of the Doctor and River Song. All the info and the teaser trailer after the jump!

A very teasing teaser of course but we do have some details from the BBC. “Doctor Who: The Eternity Clock will immerse gamers in the universe of Doctor Who, allowing them to take on the role of the Doctor and River Song as they travel across time and space to save the Earth. Gamers must learn to master the complexities of time travel with exceptional time based game play, changes made in one time will impact another creating multiple possibilities and challenging players to solve puzzles across the centuries.”

So you get to play as the Doctor AND River? That’s awesome! It’s going to be great playing as the 11th Doctor of course but I’m betting River is going to have some slick moves. And I hope there’s a “learn to fly the TARDIS” tutorial.

The BBC says a whole new story was created for the game and it was written in collaboration with the BBC Wales team. They promise photo-real graphics and television quality scenes and and action-filled plot. “The stars of the series Matt Smith (the Doctor) and Alex Kingston (River Song) have recorded full voiceovers for their characters in Doctor Who: The Eternity Clock and motion capture has been used to create in-game characters that are incredibly realistic providing the ultimate Doctor Who gaming experience.”

The Eternity Clock is “being created in full high definition for digital download platforms and is set for release in early 2012, initially on PlayStation 3; PlayStation Vita and PC platforms.” And, they are so behind the game that they’re already thinking about sequels.” Two further Doctor Who console game titles are planned to follow this release with details to be announced next year.”

Robert Nashak, EVP of Digital Entertainment at BBC Worldwide made this statement:

We’re creating these new games for PlayStation 3 and Vita with adaptations that will bring the wonder, adventure and madness of Doctor Who to each platform. Working with a top-tier UK development partner like Supermassive Games demonstrates BBC Worldwide’s commitment to create world-class Doctor Who games for fans of the show and gamers alike.

Executive producer Simon Harris has a blog post up on PlayStation’s website. He said, “Developing anything for Doctor Who has to be done right. The show has such a following that we need to be certain that everything the game does fits with the expectations of the fans.” He also tweeted that he, “would love to get the game on XBOX, but BBC cannot publish on XBLA. We are working on trying to get on other platforms.”

EDIT: A BBC representative has told me the game will be available in the United States!