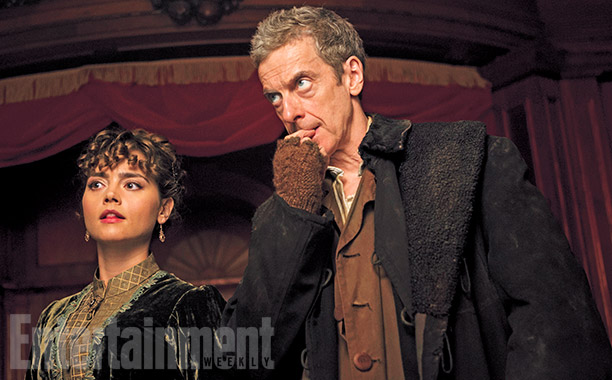 Sure, we’ve seen set pics and trailers before, but this is the first image actually from season 8 of Doctor Who. I can’t tell, but it sure looks like Peter Capaldi’s Twelve might be rocking some fingerless gloves, Aidan Turner in Being Human-style (oh, those were the days). Steven Moffat also had some things to say to Entertainment Weekly about the premiere episode, titled “Deep Breath” and featuring the return of the Paternoster Gang (Madame Vastra, Jenny, and Strax). “It’s a big introduction—he’s the new Doctor,” Moffat explains.

“There’s no point pretending that it’s not the most interesting, dynamic thing that you’ve got to sell in that first episode. It’s going to be about ‘What’s he like? How’s he different?’ I suppose it feels a bit like a character piece, but there’s plenty of action and nonsense and jeopardy, as there ever is in Doctor Who.”

Clara actress Jenna Coleman adds that Twelve is “a lot fiercer” than giant floppy puppy dog Eleven: “This man is a total adrenaline junkie.” Bring it.