Doctor Who Recap: “The Caretaker” 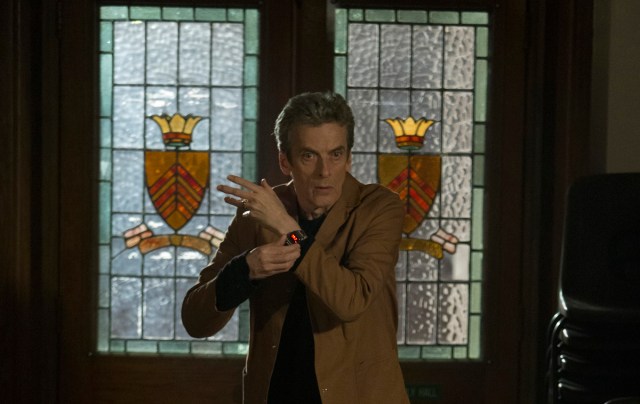 Did I think this was the single most boring episode of modern Doctor Who? Read on to find out!

“The Caretaker” – Written by Gareth Roberts and Steven Moffat. Directed by Paul Murphy.

I don’t want to keep you in suspense any longer – yes, the answer is yes. I thought this episode was terribly boring. But before I get any further, thanks to Sam for filling in for me on the last two episodes while I got some much needed R&R!

Ok. So. We start with a fun montage of adventures The Doctor and Clara had that we’ll probably never see fleshed out. One involved sand piranhas, another fish people, and of course lots and lots of running. But the purpose of this montage is to show Clara being run ragged from leading a double life – her life traveling with the Doctor and the other where she dates her co-worker.

The rest of the episode takes place at Clara and Danny’s school where The Doctor is going “undercover” as the caretaker. He’s being super secretive with Clara as to why, although I’m not quite sure why he doesn’t want her involved in this one or how he thinks he can keep her out of it considering HE’S AT HER SCHOOL.

But anyway, we get a River Song mention and The Doctor meets Danny (not realizing he’s the one Clara’s been dating) and is insistent on calling him a P.E. teacher. Danny insists he’s a math teacher but then I remembered the scene from earlier this season where he was leading kids in military exercises. UK folks told me it wasn’t unheard of for teachers to be covering more than one class but now that scene makes even less sense. Anyone have a thought? 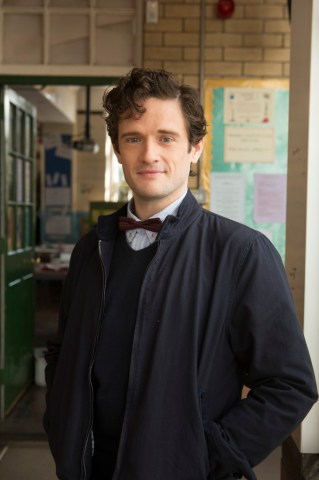 Instead of Danny, The Doctor assumes another teacher at Coal Hill, a purposeful Matt Smith lookalike, is Clara’s boyfriend. It’s equally the funniest and saddest part of this whole episode. I like it in concept a whole lot but it just brings us back to the weirdness of The Doctor (and everyone else) insisting he wasn’t Clara’s boyfriend in “Deep Breath.” SHE REALLY DIDN’T LIKE HIM LIKE THAT, OK?!?

We meander along until The Doctor lets Clara in to his game, tracking an alien called Skovox Blitzer who’s out to destroy the world. Danny finds the tech The Doctor was using to find and eliminate Skovox and in the process ruins the whole plan…and finally finds out about The Doctor for real. And what ensues is supremely uncomfortable to watch.

Danny freaks out, assumes Clara is from space and The Doctor is her space dad (*insert new, obligatory Clara insult from The Doctor here*). The Doctor, on the other hand, freaks out that Clara isn’t dating a guy that looks like one of his past regenerations claiming she’s made “a boyfriend error.”

Clara lets slip she loves Danny…and they proceed to ignore that whole thing in order to have a huge fight between Danny and The Doctor where they act super tough and macho and measure things, or something. Danny starts mocking The Doctor, calling him a General and a member of the aristocracy, The Doctor just argues and argues and I wish I could have just skipped that whole bit. It was awful.

They eventually get back to, you know, saving the day, and Danny winds up helping by using an invisibility watch The Doctor previously introduced to show up unexpectedly, do a ridiculous flip and distract Skovox just long enough for The Doctor to use his newly invented Proton pack on him.

Danny and The Doctor have what’s supposed to be a mutual respect kind of moment, I guess, where Danny tells Clara The Doctor is just acting brash because he thinks Danny isn’t good enough for her, and Danny *did* play a part in helping to save the world so The Doctor thinks he’s at least ok now. Yadda, yadda, yadda, in their canoodling time, Danny goes on to admonish Clara for sticking with The Doctor considering he’s “served under men like him,” saying The Doctor makes Clara do dangerous things, things she’s never normally do, in order to be a hero. Which, yeah, that’s The Doctor’s bag.

Sidebars this episode: Courtney Woods, one of the Coal Hill students, gets a brief ride in the TARDIS and gets sick in it, and the Promised Land returns with zero progress made in that storyline so I’m glad we’re still wasting time with it.

I just really, really did not like this episode, can you tell? There was a lot of character work done (some good, some bad) but it came at huge expense to telling an actual interesting story. I was practically bored to tears. The whole thing just felt pointless, especially the barely used villain, and more like a regular drama series rather than Doctor Who. The Doctor and Danny meeting should have been major, but did not have to take up an entire episode. The Doctor is being a huge jerk. Danny is being a huge jerk. I kind of just want Clara to ditch them both at this point and go make friends with Amy.