In which I make a Batman reference. Obviously. 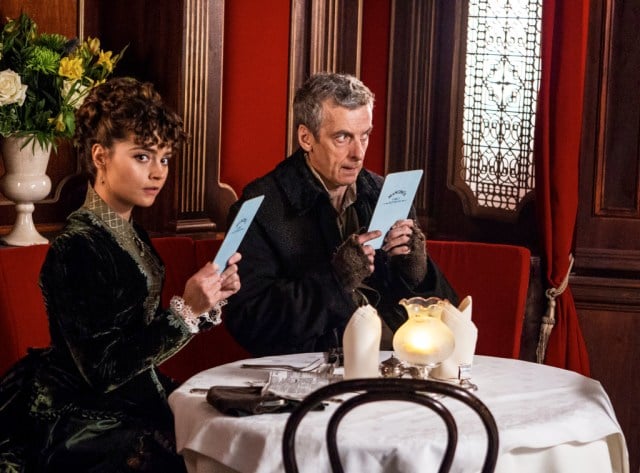 “Who is this old man and WHERE IS MY DOCTOR!?” It’s what I’m imaging many Matt Smith fans saying for most of the Doctor Who Season 8 premiere but I hope they stayed through to the end because Peter Capaldi is making magic happen.

I’ll start off by admitting I had extremely low expectations for the premiere. Mostly because, excluding the 50th anniversary episode, the second half of Season 7 left me feeling disillusioned with one of my favorite television shows. I wanted this to be good, but I wasn’t getting my hopes up. Whether that affected my enjoyment, I can’t be sure, but “Deep Breath” was in fact a much needed breath of fresh air for the sci-fi series.

We’re back in Victorian London once again, a venue I dare say we should put a giant red X over from here on out, but there’s something different this time. Namely, a tyrannosaurus rex. Not the first time our Doctor has run into one, and of course he can speak their language, but we don’t get into any of that until the mighty rex vomits the TARDIS up. Quite the visual. Madame Vastra, Jenny, and Strax are already on the case and in usual form when Jenna Coleman’s Clara and the “fresh” faced Doctor stumble out of the TARDIS.  Not surprisingly, the Doctor is quite disoriented about his current predicament and very confused about who he even is. On the other hand, Clara is also scared and confused. The one big disconnect for me in the episode is this – while I don’t believe we know if Clara has ever witnessed a regeneration first-hand, she knows it’s a thing that happens and has been involved in every one of the Doctor’s lives. 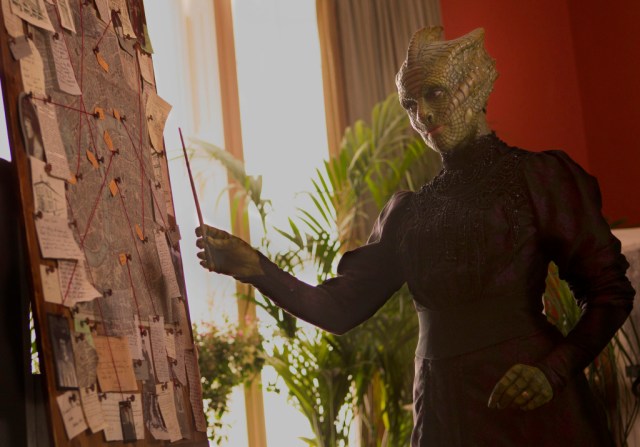 It’s a small thing but it takes up a good portion of Clara’s reluctance and distrust of the Doctor throughout the episode. Much like the Doctor’s befuddled state. It’s almost uncomfortable to watch as Capaldi plays a seemingly senile man who frightens those around him instead of instilling his usual confidence. The group of friends put him to bed and go about explaining how our current dinosaur predicament might connect to recent murders around London. Specifically murders in which the victims seemingly spontaneously combust. We, as viewers know a clockwork fiend is at large but we can’t be sure if they’re connected just yet.

Meanwhile, Vastra gives Clara a hard time for her reaction to the Doctor. In a rather tense conversation she’s accused of having a school-girl crush on him and admonished for forgetting the man with the young face is actually very old. “You might as well flirt with a mountain range,” says Vastra, and indeed, the Doctor himself exclaims to her later, “I’m not your boyfriend.” Perhaps this is more to shock viewers into realizing the Doctor has not always been an object of desire (your mileage may vary of course :) ) and won’t be this season (Rebecca is going to give me the evil eye over this, I just know it). This is also where we find out Clara’s idea of a sexy fella is Marcus Aurelius.

Moving on, Clara gets dressed up like the Victorian governess version of herself and the Doctor makes a run for it out of a second story window after seeing the poor T. rex go up in flames. Vastra is convinced the Doctor will work it all out on his own and tells Clara she’d be of more help solving the murders. The Doctor, however, is running around in a nightgown, still wondering who he is. He winds up in an alley admiring his face but also wondering “Why did I choose this face?” harkening back to Capaldi’s “The Fires of Pompeii” appearance as some sort of vague warning to himself. But there’s also the lighter, “Who frowned me this face?” and jollies with another alley occupant about his Scottish accent.

Eventually, Clara remembers she’s the Companion and can absolutely figure out things on her own and discovers a message she believes is from the Doctor in the newspaper. “Impossible Girl” it reads, with another hint to find the meeting location on the back of the page. She and the Doctor wind up at the same location, a restaurant, and after a slow burn throughout the episode, we finally begin to see what this Doctor/Companion pairing will be like. The two have a “normal” conversation and seem to be “making up” until Clara realizes the Doctor was being well, the Doctor, and actually calling out what he feels are her faults, not his own. I’d like to give more thought on this exchange after a second viewing but for now let’s move on to OMG THE ENTIRE RESTAURANT IS FULL OF SCARY CLOCKWORK PEOPLE!

Yes, the end game is revealed, the combustion deaths are really to cover up for clockwork robots stealing pieces of people in order to look more human. “There’s something very familiar about all this,” says Biff Tannen.

The restaurant is a front for human collection and Clara and the Doctor are swiftly taken down what I would assume is the Victorian version of Batman’s bat-pole and into the inner sanctum of robot charging stations (actually the remnants of their ship). They’re all asleep so the Doctor quickly falls back into detective mode, trying to figure out exactly what’s going on here and why. But when they start to wake up and it’s time to run, the Doctor leaves Clara behind to save himself. We know the Doctor wouldn’t really do that, but after how he’s been acting the rest of the episode there’s a moment where I thought, “maybe he really did.” So does Clara, of course, but she can’t worry for long as she has to save herself by outsmarting the clockwork creatures. She realizes they aren’t so smart and decides holding her breath will make them think she’s actually one of them. It works. Until she absolutely can’t stand it anymore and must suck in air. It’s a tense and crushing moment for the hero you thought was going to get away from the villain. But really, all that’s needed is just a bit more stalling (aka talking the lead clockwork robot in circles) until the Doctor (and Vastra, Jenny, and Strax) arrive. She had faith he would.

The ragtag team attempt to fight their way out but realize it’s fruitless and attempt the not-breathing thing again. Only Jenny can’t hold out and Vastra, being the Silurian she is, has extra air to spare in her lungs and gives some to Jenny…with her mouth. Yes, this was the rumored kiss we’d heard about and is absolutely a cheat. However, it’s absolutely shot for viewers to find it sexually arousing. So, that’s kind of messed up. I know I’d absolutely prefer they’d let the married women kiss like married people do. 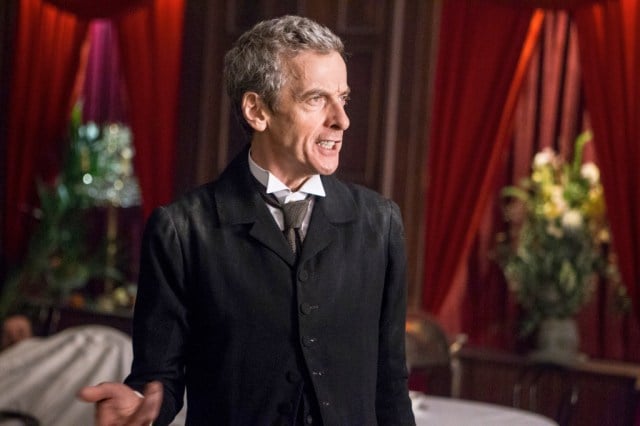 Moving on, the Doctor is removed from the equation for a one-on-one with the head clockwork robot. We learn this particular robot has an odd sense of religion, constantly talking about how they’re trying to get back to the “promised land.” The Doctor quickly dismisses this as superstition while continuing to unravel the mystery even though they HAVE MADE A HOT AIR BALLOON OUT OF HUMAN SKIN. Turns out, the original ship the clockwork robots were on was called the SS Marie Antoinette…the sister ship to the SS Madame de Pompadour, the center of Steven Moffat’s fan-favorite episode, “The Girl in the Fireplace.” Yes, while they may not be shiny and new (they have been hanging around for a while, after all), these are the same clockwork repair droids we’ve seen before, with the same fault in their programming. The Doctor shares some deep thoughts with the villain about identity and our denouement involves going against our programming. Will the Doctor go against his and “kill” the creature or will the robot go against his and “self-destruct.” We’re left to wonder as the clockwork man falls to his death from above London.

To wrap things up, confuse us, and start us off on our mystery of the season, we learn for certain neither the Doctor nor Clara put the mysterious advertisement in the paper and see the clockwork man “alive” and well again in a beautiful garden. It’s the “promise land” of course, says a mystery woman named Missy. But she’s very familiar with the Doctor it seems, calling him her boyfriend and claiming he loves her. I’m pretty sure this won’t wind up being River Song but also quite worried about the terrible trope she might fall under. But the indication is she’s the same woman from “The Bells of Saint John” who connected Clara with the Doctor in the first place.

But we’re not done yet! The Doctor and Clara return to current time with Clara still a bit disillusioned about this new face of his. Luckily she gets a well-timed phone call from “her” Doctor. Yes, Matt Smith shows up one last (?) time as the 11th Doctor to reassure Clara. I stand by my thought that she shouldn’t need reassuring but let’s face it, this is more for the fans than anyone else and it’s a cute scene.

So yeah, I think it’s safe to say I really enjoyed this episode. As I mentioned earlier, my low expectations may have played a part but regardless, I was just thrilled to get pure enjoyment from Doctor Who again. The episode had lots of humor, lots of drama, and I was also legitimately scared for the first time in a while. I still have to do some thinking on the presentation of Vastra and Jenny’s relationship here (it could certainly do with some fleshing out rather than quick quips about flirting with other people) and there were some “interesting” religious themes in the episode which might raise a few eyebrows (the cross impalement chief among them) but overall I’d call the episode a success in introducing our new Doctor. Harkening back to “The Girl in the Fireplace” could have turned out hokey or ruined the original outing but it fits well here and doesn’t feel obtrusive. I feel like the arc of this episode will have the new-Doctor adjustment period lasting shorter than usual but we shall see. All I can say now is, keep up the good work.

What did you think of the episode? The new intro? And of course, the new Doctor?