Doctor Who Recap: “Robot of Sherwood” 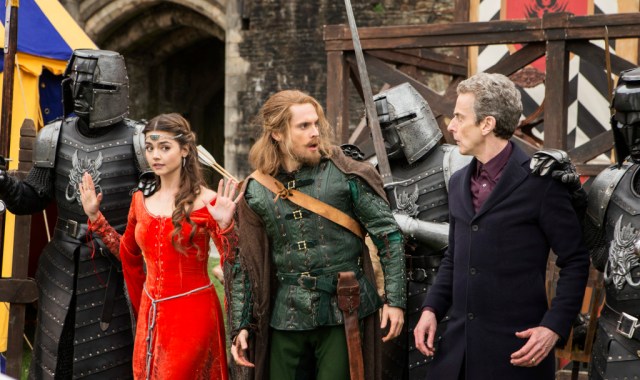 OK, well if Robin Hood is real, can we get Batman on Doctor Who next?

“Robot of Sherwood” – Written by Mark Gatiss. Directed by Paul Murphy. Guest starring Tom Riley & Ben Miller. (Looking for last week’s recap of “Into the Dalek?” Here that is.)

I’m loving watching Peter Capaldi act, but I’m not convinced he’s the Doctor just yet. And that made “Robot of Sherwood” an enjoyable, if frustrating, episode.

This week, Clara gets her pick of all time and space and asks the Doctor to visit Robin Hood of lore. The Doctor assures her he’s just a myth, but “OK, we’ll travel to this random time anyway and maybe we’ll see something.” With luck, they arrive at the perfect time and place, and Robin is there to shoot an arrow at the TARDIS. Clara enters the scene in her best Renaissance Faire garb. My goodness, I would travel with the Doctor just for the hair extension room that apparently exists in the TARDIS.

Anyway, the Doctor and Robin are immediately at odds, the Doctor because this dude obviously isn’t real, and Robin because the Doctor owns a cool box he’d like to have. They begin dueling, and the Doctor takes out a spoon he happened to bring with him… and a giant leather glove that makes him look like he’s about to artificially inseminate a cow. I really don’t know. The fight ends with the Doctor pulling a slick move, pushing Robin into the lake, and Robin popping back up to push the Doctor in. Many laughs were had.

Robin brings Clara and The Doctor back to his hideout, where he introduces the Merry Men. But considering they are all just SO DAMN MERRY, The Doctor starts pulling samples of DNA from them in order to figure out if they’re robots. Because robots are a thing that happen every week now, you see. Robots. Robots robots robots.

The famed Sheriff of Nottingham is also here and up to no good, collecting gold and peasants for some evil plan. But Robin and his men are doing their usual thing and go to the archery competition where ROBIN LITERALLY PUTS ON A HAT TO DISGUISE HIMSELF. It’s a long way from this, let me tell you. 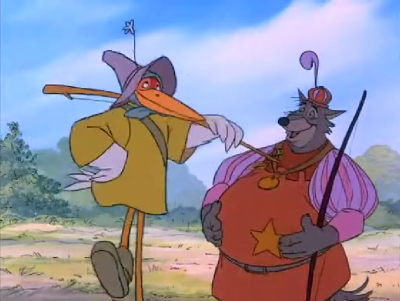 The prize is a solid gold arrow. Which makes no sense in the context of this episode since the Sheriff is hoarding all of the gold. But let’s move on.

Robin’s arrow splits the Sheriff’s in half, but The Doctor goes next and splits THAT arrow in half. This goes round and round for a bit in comical fashion until The Doctor EXPLODES A TARGET OF HAY WITH HIS SONIC SCREWDRIVER. 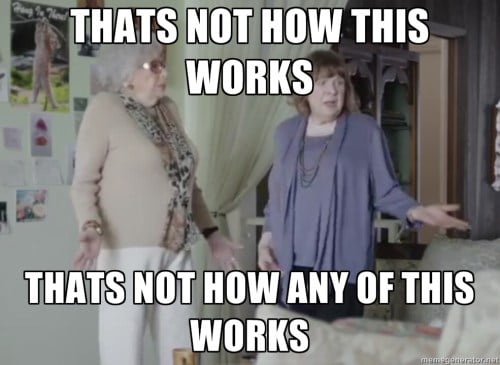 So they’re all captured and locked in the dungeon because The Doctor is obviously some sort of witch. It’s at this point in the episode I kind of want Clara to leave so The Doctor and Robin can have their own episode with amazing banter. AND THEN SHE DOES.

Actually guards take her away to be “interrogated” by the Sheriff, because they think she’s the one in charge. We see some of what’s going on behind the scenes, like medieval robots with laser cross weapons on their heads (I’m sensing a religious imagery theme this season) forcing peasants to help melt all the gold for a giant circuit board-type thing. Clara uses the Sheriff’s high opinion of himself to get him to spill the beans: A skyship fell from the sky and they recognized him as a born leader and they’ll help him take over the world. You know, the usual. 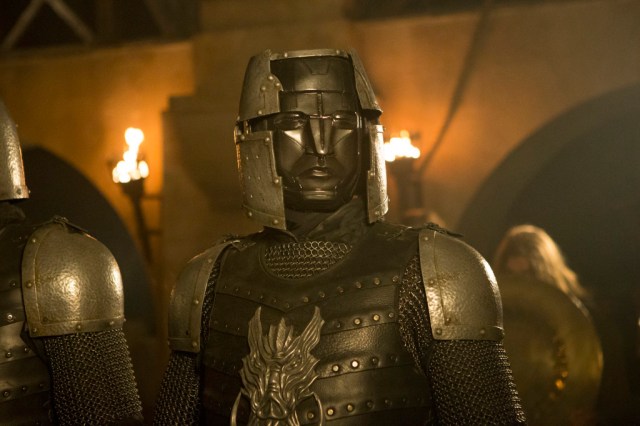 Once The Doctor and Robin make their escape and find the bridge to the skyship (which as it turns out, is the entire castle), The Doctor does a little digging and finds that the destination for said ship is “The Promised Land.” The robots and the Sheriff barge in, and The Doctor tries to explain the gold they’re using isn’t quite enough for them to break through Earth’s atmosphere, and if they try, the whole thing will just explode.

They all make their way back to the gold-melting area where The Doctor enlists help of the imprisoned peasants to kill all of the robots by deflecting their cross-lasers back at them with giant metal dishes. Robin and the Sheriff have a final showdown right over the vat of melted gold, and Robin winds up using The Doctor’s move from the beginning of the episode to take him down. He falls into the gold but is probably going to make a return because they chose to show us his gold-covered hand on the side of the vat.

But while everyone escapes the castle, the ship is still taking off and will explode too close to the Earth, killing countless people if they don’t do something. The Doctor asks the Merry Men if they’ve got that golden arrow—they do—and it’s decided that little bit of gold is enough to get the ship far enough away. But like, how are they going to get it into the ship? Oh… oh, they don’t need to? The Doctor literally only has to get it to stick on the outside of the ship? Ok then. 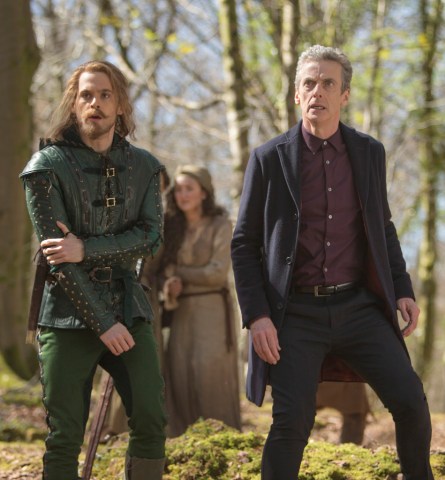 I’ll let it slide, but only because it was followed by some extremely heart-warming dialogue between The Doctor and Robin about heroes and the power of stories. Aaaaaaaand just for kicks, that peasant girl who didn’t have much dialogue or character development is actually Maid Marion and The Doctor has plopped her right where they leave so Robin can find her. The End.

We were spared an actual cut-away to The Promised Land this episode, for which I am forever grateful. I liked this episode as a nice jaunt and would have preferred it not actually attaching itself to the overall plot of the season, but it was fun regardless. What did you think? Are you with me on The Doctor picking up Robin for his next Companion?