It wasn't even a real kiss anyways, guys, come on. 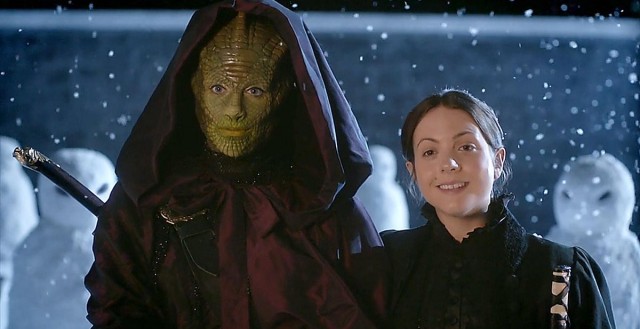 You guys all watched the Doctor Who series 8 premiere, “Deep Breath,” right? If you did, you probably noticed an almost-awesome lip-touching moment between kick-ass Silurian lady-Holmes Madame Vastra and her adorable wife, Jenny Flint. As it turns out, not everyone is okay with seeing two married people kiss, because the girls’ moment was cut from the broadcast for Asian audiences.

Though the UK Office of Communications (Ofcom) decided to rightfully ignore the six whole complaints they received about the kiss at home, the BBC was unable to ignore the potential consequences of airing the six-second scene in Asia. Doctor Who is broadcast by BBC Entertainment to places like Hong Kong, Thailand, and South Korea through Singapore—which means every episode has to pass the Singapore Media Development Authority (MDA) broadcast code or face fines. And “Deep Breath” did not.

According to the regulations for channels like BBC Entertainment that operate with an MDA subscription licence, only shows targeted at audiences over 18 years of age may depict same-sex relationship content. The actual rules state that, in shows labeled “M18” (which Doctor Who, being a family show, is not), “[h]omosexual theme/content as a sub-plot may be permitted, if discreet in treatment and not gratuitous” and “[d]epiction of occasional, mild sexual activity (i.e. kissing and hugging) between persons of the same gender may be permitted if justified by context and not gratuitous.” Essentially, if Doctor Who were an “adult” show, the kinda-kiss would have been allowed; but since kids might watch, it was deemed inappropriate. What a nice message to send to children.

In a statement to BuzzFeed, the BBC said that “in order to comply with broadcast regulations in Asia where our BBC Entertainment channel airs, BBC Worldwide made a brief edit to the first episode of Doctor Who series 8, but did so without detracting from the storyline.”

Right, because, like Jill mentioned in her “Deep Breath” recap, the “lesbian kiss” scene was hardly even a true kiss to begin with. All other married couples get to share normal, married-people kisses in Doctor Who, but for Jenny and Vastra it has to be some weird pseudo-CPR situation? How about they just kiss like Amy and Rory did literally all the time?

And, funny thing; I don’t seem to remember any press releases or censorship stories coming out when Eleven kissed Rory. Let’s make ourselves feel better about this whole thing by going ahead and watching that scene on a loop. You’re welcome.