Doctor Who Recap: “Into the Dalek”

In which we can't ignore Star Trek. 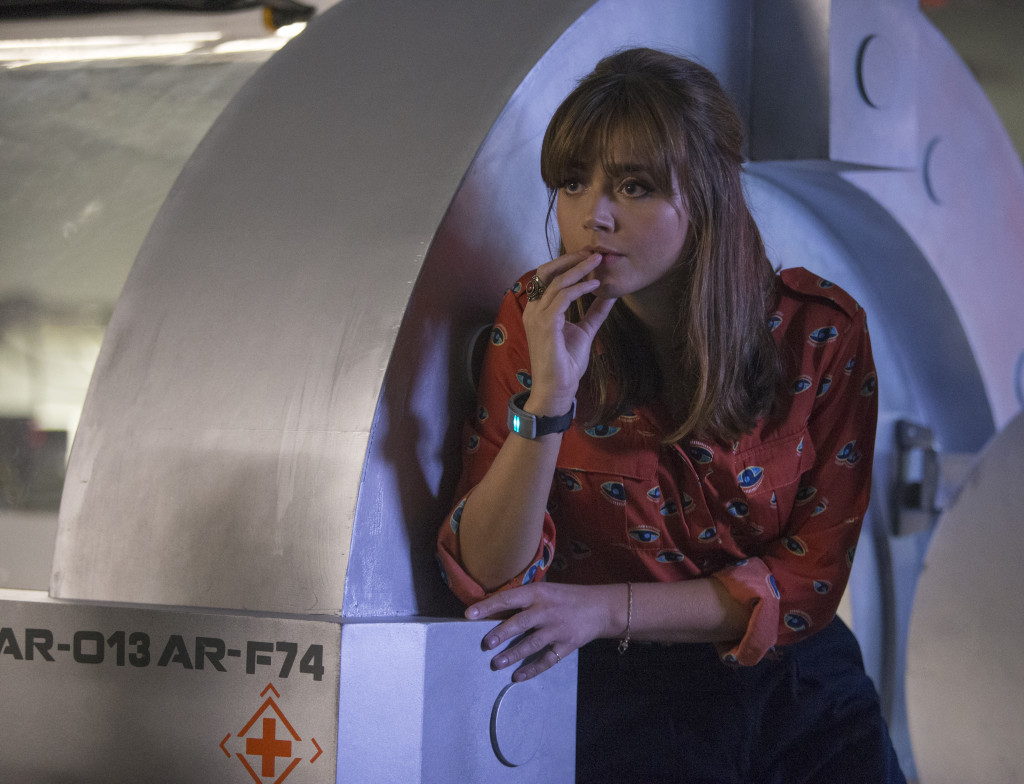 We’re off and running (quite literally as is usually the case with Doctor Who) for Season 8. The most recent episode brought the daleks into play once again but was the execution unique or a repeat of the road often traveled?

“Into the Dalek” – Written by Phil Ford and Steven Moffat. Directed by Ben Wheatley.

We open with two members of the military attempting to escape a dalek ship. They’re headed back to their ship, the Aristotle, but only one makes it alive and only thanks to the Doctor’s interference. Why did the Doctor pop off into a space fight while he was getting Clara coffee? Who knows? It’s the Doctor. Regardless, we learn the casualty was Lt. Journey Blue’s brother and when she and the Doctor arrive at the Aristotle her uncle says they must kill him to keep their secret location safe. Except wait! He’s a Doctor and we need one of those. The Aristotle is housing a “sick” dalek who meets The Doctor in a manner oddly similar to Christopher Eccleston’s “Dalek” episode from Season 1 of the modern series. But let’s put this on pause, Clara needs to meet her future boyfriend.

At the Coal Hill School, Samuel Anderson’s Danny Pink is giving students military-like exercises. But he’s a math teacher? And we learn very heavy-handily that everyone he works with thinks he sleeps with everyone he can get his hands on. It’s awkward and weird. Also heavy-handed is the scene in which we learn he has a traumitized military past when his students ask him if he’s killed anyone who wasn’t a soldier and he cries in front of them. It’s awkward and weird. But apparently it’s love at first sight for Clara who insists on the two getting a drink even though he was too shy to accept initially but will they ever get that drink? The Doctor has just popped back (3 weeks after he first went for coffee) to get Clara’s help on this whole dalek situation. 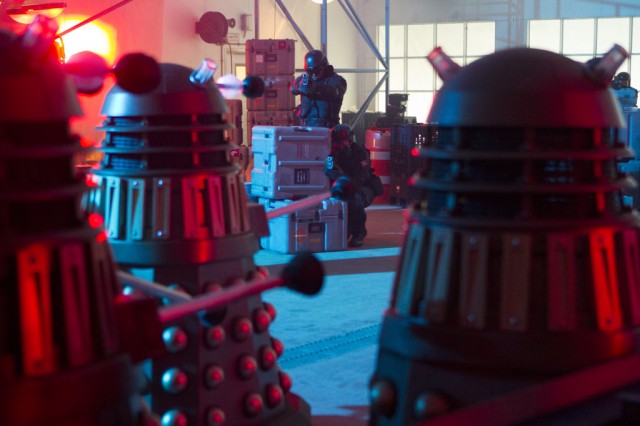 Back at the Aristotle we get a quick tour of the facility and even more info on this dalek. It’s insisting “daleks must be destroyed,” which, hey, sounds great and all but the Doctor is still giving it (he starts calling the dalek Rusty) the stink eye. Oh, and we’ve got this nano-scanner here which can make us all small so we’d like to go on a military mission inside the dalek with you and your “carer” to find out why this particular dalek is “good.”

If you were hoping you’d get to enjoy some other work by Game of Thrones’ Ben Crompton (Dolorous Edd) guest starring in this episode, I’m sorry. He was the first casualty upon miniaturization in the dalek. You see, while Rusty is “good,” his dalek body reacts to foreign invaders just like anyone else – it releases antibodies. The Doctor is quick to move them along and really kind of mean when he tells the survivors knee-deep in goop that their friend is probably the “top layer, if you want to say a few words.” Dang.

The rest of the episode moves along at a fairly quick pace. The Doctor has a chat with Rusty and finds out he had his change of heart after seeing the birth of a star and realizing life is never ending, even if the daleks are constantly killing everything. He also says the line “the silence and the cold” and dammit, I can’t hear “the silence” on Doctor Who anymore and not assume they’re going to bring those creatures back around again (please don’t). The team find the source of Rusty’s malfunction and, like idiots, fix the radiation leak leaving Rusty to go back to his old self. He then goes on to say “resistance is futile.” Twice.

Rusty has now called on his nearby dalek pals to attack the exact location of the Aristotle, while our team is theoretically helpless to do anything about the impending attack. And then Clara slaps the Doctor. She didn’t need to. Really. It amounts to her “talking some sense” into him about what they’ve learned today, like the teacher she is. You see, regardless of how he feels now, Rusty still has those memories of when he saw the star being born and if the Doctor can get him to remember them, maybe he’ll turn good again.

In order for them to do this, another one of the military team, Gretchen, must sacrifice herself to the antibodies, and does so bravely. And then she wakes up in Missy’s realm. Oh ok, so this is going to be an every episode thing I guess?

Journey and Clara are tasked with actually reawakening Rusty’s memories which have been suppressed, while the Doctor speaks to him directly and decides a “mind meld” is a good idea to wake up all those fuzzy universe memories.

Only, you know, the Doctor has seen some serious shit and has an immense grudge against Rusty’s whole race. Yadda, yadda, yadda, Rusty now considers daleks evil. It helps the Aristotle from not being decimated but it also presumably sets up some interesting things to come. Once The Doctor, Clara, and Journey are back to their normal size, Rusty tells The Doctor he is “a good dalek” and I’m just gonna go back on the dalek ship and probably kill them all now, kthnxbai. Journey, who was an interesting character we just didn’t have enough time to see developed, tries to insert herself as a new Companion and The Doctor is all “I have a rule against soldiers.” Uh oh, Danny.

“Into the Dalek” wasn’t quite what we’ve seen before but I wouldn’t say it was wholly unique in dalek territory either. Surprisingly, not once was Jenna Coleman’s past turn as a dalek/Oswin from “Asylum of the Daleks” mentioned, which I certainly thought it would be. There were some weird jabs at Clara by The Doctor  – “Not a young woman anymore” and “your hips are fine, you’re built like a man” – which weren’t appreciated by this writer but I’m glad we’re actually getting to know her a bit more here and there. As I mentioned, I thought the Danny intro was heavy-handed but I’m interested to see where they take his character. And I’m not sure if the last name of the soldiers Pink/Blue will turn into something more or was merely meant as connective tissue for this episode. Overall, I felt “Into the Dalek” was an interesting, fun adventure, I just would have preferred to see it play out in a more detailed way.

How did you feel about the episode and how are you feeling about Peter Capaldi after we’ve seen a bit more of him as The Doctor?