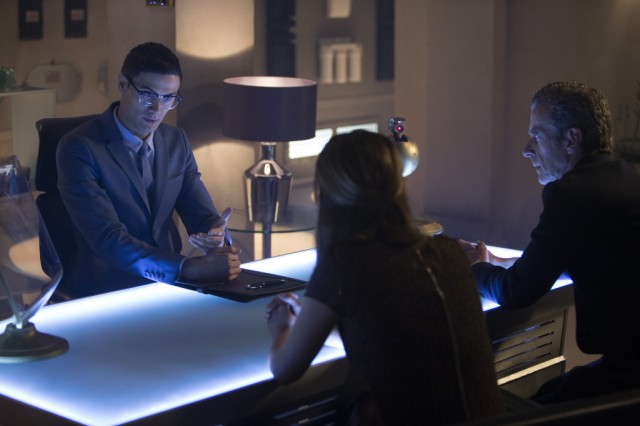 When they say “dark” they aren’t kidding around.

Where do I even start? This was a seriously major episode of Doctor Who. It had implications for the overall Whoniverse as well as probably the minds of countless human beings.

Clara was apparently planning a big talk with Danny, one which involved her leaving post-it notes for herself so she wouldn’t forget the things she wanted to cover, but all she got out (over the phone) was a sincere “I love you.” Wonderful, wonderful, warm and fuzzy – BAM- Danny is hit by a car and killed.

Oh, no. That didn’t just happen. That would be awful.

Except it did. It totally did and depending on what happens in the second half of the finale could have definitive effects on Doctor Who as we know it. But the hits didn’t stop there. Clara is in denial, or at least not accepting Danny is dead until she gets to talk to the Doctor. Her grandmother tells her she needs to cry. Instead, she plans to steal all of the TARDIS keys and threaten the Doctor into helping her save Danny. This all plays out in flashes both on the TARDIS and a volcano. It’s gut-wrenching. Clara seemingly knocks the Doctor out with a sleep patch in order to start dropping keys in lava one by one until he agrees to help her. He tells her he can’t because then they’d be in a paradox loop and she fires back with “you can break any rule you want.” Which, let’s face it, he can and does on a regular basis even though he claims he can’t. He fires back with “do as you’re told or stop threatening me.” She winds up destroying all of keys.

Then we find out he knew she was up to trouble and actually used the patch, which was more to make a person suggestible, to see how this scenario would have played out if it happened for real. Oh, this is… uncomfortable. The Doctor says “go to hell,” which Clara takes as a personal suggestion, when really he meant “let’s go to hell or wherever people end up after they die. I’ve always wanted to take a trip there.”And even though he admits Clara betrayed him big time, he says “Do you think I care for you so little that betraying me would make a difference?” And in my head I say, “well, yeah, but that’s a larger issue I’ve had with the characterization this season.” Moving on.,

Oh, sidebar: The Doctor says “in darkest day, blackest hour” and I wondered who was the Green Lantern fan and then which corps the Doctor would be in.

Meanwhile, Danny “wakes up” in the Nethersphere After Death Department, aka the Promised Land, aka where we’ve been seeing all the dead folks show up this season. The worker (though not sure if he gets paid) Seb shows up for orientation and asks Danny if he was meant to be cremated. This will be important later.

As Clara and the Doctor head off to find Danny (using the same TARDIS mind meld trick from earlier in the season) we get what may be the worst insult he’s thrown at his Companion all season – “mopey puts years on your face.” The man she loves has just DIED and he tells her she looks too sad and that looking sad makes her look old.

Clara and the Doctor wind up at a mausoleum called 3W, whose motto is “rest in peace, we promise.” Creeeeeeeeeeepy. But it doesn’t stop there. There are skeletons in what appear to be fishless fishtanks. And they’re sitting in chairs. One of the tanks says it holds someone named “Xylo Jones” and my first thought was Ianto, then Martha, then Harriet. It certainly means something, they lingered on it, but I have no idea what.

After a quick computer explanation of what 3W (the truth about death experience) is, Missy reveals herself. And kisses the Doctor forcibly. Oh good, we’re still employing that technique. Missy claims she’s a robot – Mobile Intelligence Systems Interface – but also puts the Doctor’s hand on her chest to feel her heart, which she says in maintained by the Doctor. Only a Dr. Chang shows up just at that moment to try and deal with the new “customers.”

Back to Danny’s ordeal, he’s obviously a bit freaked out to be dead but hey, there are iPads in the afterlife (and Steve Jobs, exclaims Seb). After defining the Nethersphere as just “more life than you were expecting, “Seb says there’s a few things they must go over, one of which is to find out if Danny has ever killed anyone. From previous episodes we know he probably has and that the person(s) were innocents. Turns out he killed a young boy accidentally while at war and now that boy wants to meet him. They meet but the boy is too upset to accept Danny’s apology and runs off. And then Seb says the reason Danny has been cold all this time is the body remains conscious after death. Danny is cold because his body is being kept in a freezer unit… except he’s probably going to be cremated eventually and yes, he will feel that. WTF. WTF. WTF. As if we’re all not worried about what happens when we die enough, Steven Moffat decided to insert that nugget into our brains. 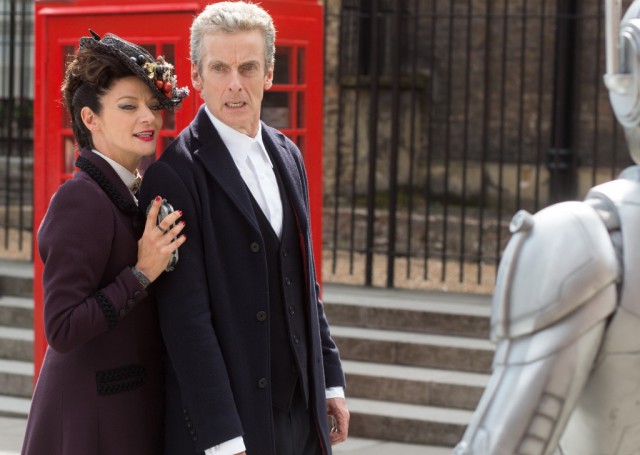 Around this time, Clara and the Doctor are sort of learning the same thing from Dr. Chang. 3W’s founder, Dr. Skarosa (a reference to the home world of the Daleks or something else?) was researching white noise and found a message in the static – “don’t cremate me.” I repeat, this is super screwed up, Moffat. Change also fills in details of the tanks, which contain x-ray water, aka dark water, which only shows organic material. Still confused about the chairs but I suppose it makes things more dramatic as the skeletons start standing.

Chang and Seb are able to connect a call between Clara and Danny but the Doctor insists she must remain critical, it may not really be Danny after all. And then things get kicked up a notch with Missy killing Chang, the Doctor realizing the Nethersphere is actually very small and must be Time Lord technology, and finally Missy revealing herself as a Time Lord, or rather Time Lady and oh technically also The Master.

Missy talks about being abandoned and left for dead and lets us know the dead outnumber the living and also all these Cybermen I’ve been collecting are going to take over the world. It all went down very quickly so I may have to watch it again to get the exact gist but eviiiiiiiiiil. Danny forces Clara to hang up on him when he realizes she’s intent on finding him, which would mean having to die and is then informed by Seb he can make all his pain go away by hitting… wait for it… “delete.”

I have a lot of feelings about this episode but I don’t want to get into them too much in case the extended second half reveals certain things. Suffice to say, if anyone was still trying to argue Time Lords couldn’t change gender, you’re officially officially wrong (though you were wrong before too). The Master regenerated into a woman, which has been a prevailing Missy theory since the character was announced. I suppose Missy could be lying and is actually the Rani (who worked with the Master in the past) but I’m guessing not at this point. We had another non-consensual kiss on the show but not just that, if this is the Master there’s some “well, he’s been in love with the Doctor for a while I guess” things to discuss. The whole “feeling things after you’re dead” thing is still rubbing me the wrong way, especially when I think about this being a kid’s show and all and what that would have done to my psyche as a young child. I will say this for the episode though: I can’t wait for next week.

What did you think of Part 1 of the Season 8 finale?