The Mary Sue Review: Doctor Who – The Ninth Doctor – Weapons of Past Destruction #1

We may never have the Ninth Doctor appear on TV again, but comics are another story! 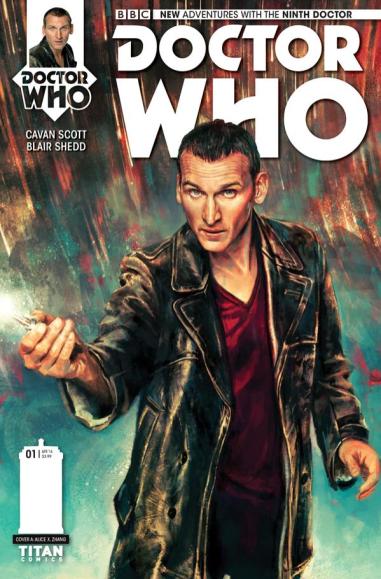 My first Doctor was the Ninth Doctor, and it was Christopher Eccleston’s performance that won me over and kept me coming back to my new love, Doctor Who. Which is why I was thrilled to learn that Titan Comics would be releasing a new five-part miniseries of Doctor Who comics starring the Ninth Doctor!

This story (first of what I hope will be many), “Weapons of Past Destruction,” is written by Cavan Scott with art by Blair Shedd, and is a promising opening for what’s to come. It has an intriguing set-up, taking place between the Ninth Doctor episodes “The Doctor Dances” and “Boom Town,” allowing for The Doctor, Rose, and Captain Jack Harkness to travel in the TARDIS as a team, which is a dynamic I loved and wish could have been explored on the show. Here’s the official synopsis of the miniseries:

The Ninth Doctor is BACK with a brand-new miniseries: WEAPONS OF PAST DESTRUCTION!

Leaving World War II behind, The Ninth Doctor, Rose and Captain Jack discover that Time Lord technology, lost in the wake of the Time War, is being sold on the intergalactic black market!

Now the threat of a NEW temporal war brews on the horizon. Can the Doctor stop history repeating itself?

The problem of a new temporal war is a particularly interesting one to explore with the Ninth Doctor, as he is the one who’s wounds from the Time War are the freshest. With Issue #1 of this series, that exploration is interesting indeed, but it isn’t perfect.

The story begins with the Doctor taking Rose, and Captain Jack to a planet called Excroth, which seems to have been long destroyed, despite the fact that they’ve arrived at the point in time when that planet should be at the peak of its scientific and social development. As they examine the situation from the TARDIS, an enormous ship appears, and when Team TARDIS go onboard and confront the robot-like beings on it, the Lect, another group of flying robot-beings, the Unon, appear, and they start duking it out. This sets up a lot of the key ingredients that we’ve come to love about the Doctor: his penchant for defending the underdog, his distaste for guns, and even the exuberant fun that he has when running to or from danger. I’m so glad that gets captured on these pages, as too often Nine is treated like “the sulky one,” and people forget that he actually did have a fun, adventurous streak in there, too. There are even some allusions to future episodes of Doctor Who, both in relation to the Doctor and to Rose, that I don’t want to spoil here, but that I liked seeing.
[slideshow id=2758]

While I loved the intention of this story, I had a bit of trouble with Scott’s pacing. Much of the issue seems to be characters reacting rather than acting, which made the issue drag in places. Also, having two alien races whose faces you can’t see doesn’t do much to pull me into their lives or conflict, either, though Scott’s dialogue for them does imbue them with feeling at key moments. Shedd’s artwork is wonderful when we see faces up close – there’s a particularly beautiful panel of the Doctor’s face on the first page – but is less so when drawing action. The layout of the panels was very straightforward, and yet I sometimes had a difficult time following exactly what was happening, or what the characters were doing, because the art wasn’t clear.

Still, this is only the first part of a five-part story, and Issue #1 ends with an event that definitely makes me want to continue on to the next issue.

If you have a special place in your heart(s) for the Ninth Doctor, as I do, Doctor Who: The Ninth Doctor #1 is worth a look. It goes on sale April 1st!

CORRECTION 3/19/15: Cavan Scott is male, not female, but you should totally check this comic out anyway.