Steven Moffat Adds To Our Doctor Who Companion Confusion 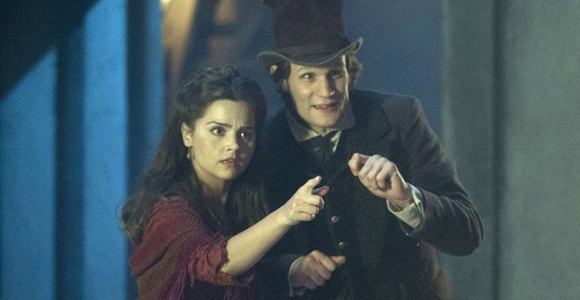 With Doctor Who Season 7B premiering this weekend on BBC America, a new chapter to the mystery novel that is Companion Clara will be revealed. We sat in on a press conference call with Steven Moffat this week where we tried to sort out a few things. Turns out, we still have no idea what’s going on.

Not too long ago we ran a story in which Moffat said “I defy anybody to guess” the mystery behind the new Companion. We took the bait.

It’s not so much that I want to spoil this season’s mystery for myself, or anyone else, but I wanted to clarify some things that already happened to help me going forward. To wit, Oswin Oswald’s part of the story. While doing press for the first half of Season 7, it was stated having actress Jenna-Louise Coleman play Oswin was a last minute idea from Moffat.

At the New York premiere of “Asylum of the Daleks,” Executive Producer Caroline Skinner told Chris Hardwick and the audience, “I probably am the only person who was there when Steven Moffat, middle of casting the new Companions from Christmas onwards, came up with the idea to also make her Oswin. And Matt [Smith] and I turned around as you were watching it and I think that the same gleeful look that was in his eye at that moment when he said to me, ‘Caro I think I’ve just come up with something that’s really, really cool,’ was in everyones’ faces as you saw who she was.”

So seeing as he had this idea later on, it got me thinking, which character had a different story arc before he decided to use Coleman for both roles? Was it Oswin or Clara? Here’s what Moffat told us.

The slightly dull answer, is that all never happened, it’s been misreported. It was the plan, from a while back, to do this “impossible girl” intro to the new companion intro for Clara. It was confusing, of course, for the actresses auditioning, because we had to check they had to play all three parts, and we didn’t want to spoil the Asylum reveal – so we, erm, lied, and I wrote up sample scenes for Oswin, governess, and modern Clara, all of whom are subtly different. And Jenna knocked it out of the park, as you’ve seen.

It’s interesting actually — I think I can tell you this — that that was never the initial plan either, to have me be Oswin. That was part of a genius plan that Steven came up with half way through the audition process. That was already written but not written for what was to be the new companion. I was auditioning for the companion and then I got all these sides and I was like, “Who’s Oswin? They clearly don’t know what they want, they obviously don’t know what they’re looking for. They just want people to show them different things and see.” This is what I assumed when I was auditioning, not realizing that it’s basically Steven’s mad genius again.